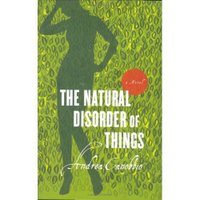 Andrea Canobbio gives the alert reader a clue about his intentions in The Natural Disorder of Things when he gives one of the characters, a Polish gardner with a literary background, a name that is a composite of the two great Polish philosophical novelists and playwrights, Gombrowicz and Witkiewicz. The murder plot of Canobbio's novel is a McGuffin (do I have that spelled right?) in reverse--not a seemingly casual element of a story on which Hitchcock (it's his term) hung a mystery plot for a movie, but a plot on which Canobbio hangs an existential inquiry. The novel is not an allegory, something that will reveal the author's systematic philosophy, an approach that Canobbio shares with the equally oblique Polish authors I mentioned. Canobbio's approach isn't symbolic allegory but a maze--specifically a garden maze that might be constructed by the garden designer at the center of the novel--but a maze with no center and perhaps no exit. Claudio Fratta witnesses a murder that might be called "overdetermined," to use a word from the Poststructuralist philosophers (the man that Fratta has been watching (for reasons we don't learn until later) is essentially killed twice, by being run over first by a van with unrevealed drivers and then by a car driven by a woman with whom Fratta becomes obsessed. The novel progresses in events that will only be explained in later passages, as if a maze is being followed blindly or an onion is being peeled. The revenge demanded by Fratta's family after being bankrupted by a predatory lender, the affair between the previously solitary Fratta and the woman (who becomes his client), the man who is possibly (and possibly not) her husband, Fratta's brother and nephews, and Fratta's neighbor and his dogs, bred to have stripes (in particular a striped Doberman)--all these elements intertwine not to solve the initial murder but to precipitate a mirroring event that to some extent resolves Fratta's life, or at least brings him to the end of a chapter. The novel can be frustrating in its herky-jerky progression, and is perhaps too much a drama of ordinary life (rather than a crime story per se) for many fans of noir. But it has prodded me to pull out Gombrowicz's "thriller," Pornografia, which I'll report on as soon as I've re-read it. I'm looking for other suggestions, if anybody has some--as I'm in a dry spell for reading that's relevant to this blog. There are a number of books being translated for publication in the spring of 07, but not much new is available right now. Maybe I've missed something, though--any suggestions?
Posted by Glenn Harper at 1:57 PM

There are more of Massimo Carlotto's novels due to be published in English, it appears. You may want to keep an eye out for those - just a suggestion. I've enjoyed his work so far, myself.