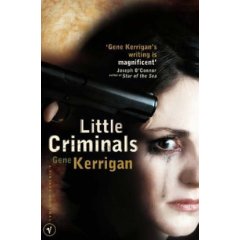 There are some writers who seem natural, as if words simply flow freely into finished form: Elmore Leonard, maybe; and there are some writers whose work is professional, well structured: Henning Mankell, perhaps. But there are others who are both natural and professional, some of them coming from a journalistic background, like Gene Kerrigan from Ireland or Deon Meyer from South Africa. Kerrigan's first fictional book, Little Criminals, has both a seemingly careless plot, as meandering as Elmore Leonard's--but at the same time it has a tight overall structure so that at the end of the book, everything seems both inevitable and aesthetic. Little Criminals takes one of the pulp-iest plots in all of crime fiction, the same story as that masterpiece of the cheap paperback trash of early noir, No Orchids for Miss Blandish, a book I've mentioned before: the kidnapping gone sour. But Kerrigan uses the pulp-y plot in the service of a portrait of the post-Celtic Tiger, Euro-centric, urbanized Ireland of today, in all its consumerist, un-quaint glory. Nobody in the book is entirely likeable, but it's a book you shouldn't pick up unless you're willing to stick with it for a while--Kerrigan will build up the tension until you have to keep going, you won't ba willing to stop. And just when you think you know what's coming, he takes a non-pulp sideroad into an intimate portrait of small town life, integral to the plot and at the same time affecting without descending into bathos. Yet the ending has something in common with No Orchids for Miss Blandish, a hollowness within the relief of the resolution, a desperation that comes only partly from the awfulness of the things that the characters have experienced. If you think I'm making too much of what is after all a crime novel well within the noir and pulp traditions, reconsider after you've read Little Criminals--this is a terrific book. I've ordered the sequel, but it doesn't seem to have been released yet.
Posted by Glenn Harper at 5:24 PM

I liked No Orchids..., so I shall probably like this, too. Thanks for "drawing it to my attention", as the saying goes!

The Midnight Choir came out in the UK last June and the paperback is this June but it looks like the excellent Europa Editions also have a US edition out in April.

I've just finished Little Criminals now, and agree with you that it is excellent. I'm looking forward to The Midnight Choir.