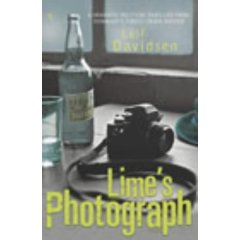 Or Noir Euro-thriller. Lime's Photograph is a few years old now, but it's a pan-European political novel that avoids a lot of the flaws that, in my opinion, mar the thriller genre as a whole. First, it's a first person novel, with Peter Lime (Danish emigre living in Spain, paparazzo and former leftist) occupying the center of the tale. And although geo-political concerns are aired (those of the post-Wall, EU world we still live in today), Lime isn't walking up to Prime Ministers or one-handedly preventing an international assasination. He takes a damaging photo of a Spanish official in a sexual tryst on a private beach, gets harassed by the police, approached by the Danish security service, and his personal life is wrecked. I won't give away any more of the plot, but it's about Lime in the context of the new Europe, not about kings and presidents and prime ministers. Davidsen is a silled and careful storyteller. The events unfold in a leisurely way (the paperback is 375 pages, plenty of room for the tale and its convolutions to unfold). The focus is on Lime's personality as it suffers and responds to events, as much on the plot (though plot is not stinted, there's plenty of story). I don't know of any other single novel that so carefully and effectively portrays at least 4 nations in the new world order (Spain, Denmark, Germany, and Russia). The passages of action (more necessary for a thriller than other genres within the noir landscape) are effective without overwhelming the rest of the story. The ultimate resolution explains the many threads that have gone before. And the reader's passage through the whole journey is most enjoyable.
Posted by Glenn Harper at 4:29 PM

I thought everything in the novel was a little "too much". Not only is Lime portrayed as one of the happiest people in the word (rich, beautiful wife etc.), but Davidsen threw in all European conflicts he could think of: ETA! IRA! Stasi! KGB! Even post-Franco Castilian-Catalan tensions get mentioned.

Still I think the novel is worth reading. Davidsen knows what he's writing about, especially when it comes to Spanish issues. And he has a talent to create vivid characters. I still remember them, although it's a couple of months ago since I read the book.

You describe interesting books!
I am reading your archives:)))

I add your page in my blog.
Why?
Because I like very much prisons and writer as: Mankell, Donna Leon, Caroline Graham, Somoza.
And I recognize others writers.

I am reading not all prisons but else literature as:
Antonio Munoz Molina, Gretkowska, A. Trollope, J.C. Oates, Atwood,
Adele Geras.

Unfortunality a many book isn't published in Poland.
When I check a titles a books for your page , some few in my coutry.