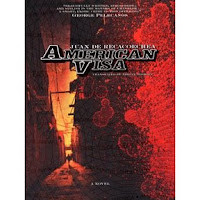 Amerian Visa, by Juan de Recacoechea, comes with a blurb by George Pelecanos invoking the name of Chandler, as well as marketing that niches the book as a crime novel. There are certainly enough references to Chandler (and even more to Chester Himes, one of whose novels the main character steals)--but American Visa is really a picaresque rather than a noir crime novel. Not that that is a lesser thing (and the picaresque certainly has a long pedigree in Spanish-language fiction), it's just something different. The crime that the story leads up to is a theft and murder, but then so is the crime in Crime and Punishment (which is of course neither picaresque nor noir). That said, Recacoechea's book is a rare glimpse into Bolivian lower class society, and an insight (especially valuable for those of us living in the U.S.) into Latin American attitudes toward their northern neighbour. Plus the narrator-hero's voice is lively enough to keep the story going and the reader (even the dedicated crime fiction reader) interested, even though the crime plot isn't even hinted at until well into the second half of the book. There are a couple of cliches, particularly the happy whores with hearts of gold, that are undersandable in the context of the typologies appropriate to the picaresque, in which the plot is a string of incidents not necessarily related in any structural way, with characters who represent types rather than being completely individualized. Recacoechea in fact gives the characters more history than the picaresque necessarily calls for, and his setting is carefully portrayed in realistic terms (apparently in explicit revolt against the magic realism that we of the north have come to expect in the Latin American fiction that reaches us in translation. As such, American Visa is a valuable addition to the South American repertory available in English--and lest anyone th ink I'm damning the book with faint praise, that is not my attention. I enjoyed the book, though it was not quite what I expected from the marketing (and to give the marketing its due, the phrase "picaresque noir" does appear therein.
Posted by Glenn Harper at 5:17 PM

Hi, Added a new value add to my blog this weekend - a news widget from www.widgetmate.com. I always wanted to show latest news for my keywords in my sidebar. It was very easy with this widget. Just a small copy paste and it was done. Great indeed.