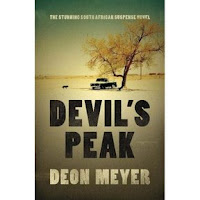 I use the word "noir" in the title of this post, but Deon Meyer's newly translated and published (only in U.K. so far) Devil's Peak is partly police procedural, partly thriller, partly revenge tale. But it shares a good deal with the novels of George Pelecanos, particularly in that revenge plot, and Pelecanos is generally though of as "noir," so I feel justified in inlcuding Meyer's novel in that category. In fact, Meyer's book is better (in terms of the revenge plot) than most of Pelecanos's stories: Devil's Peak is more complex in the telling, providing several levels of contrast (through the eyes and voices of other characters) to the avenger's moral point of view. Meyer's plotting is also more complex, though the revenger has a similar motive to that of Pelecanos's heroes (a personal grudge elevated to an almost mythic level, the individual's violence becoming a kind of flawed justice for those neglected by society and damaged by the violence of others). The emphasis with Meyer is on the flawed part of the justice, which is emphasized by the police procedural segments of the book. I find it difficult to say much in terms of the way the plot works, for fear of giving something away and spoiling the reader's experience--suffice it to say that tone of each of the three main narratives, and the personality of the three characters at the center of those narratives, is handled carefully and variously, taking full advantage for the plot in the differences in the motives and lives of the three. In broadest outline, Thobela, a character from two previous Meyer novels, loses an adopted son to violence and becomes a vigilante fighting those who do violence to children. Benny, a drunk cop who has also appeared in other novels, crawls out of his alcoholic depths just in time to be assigned to chase the vigilante. The third strand deals with a character not at first obviously involved with the other two (though a reader may guess at the likely connection), an "escort" named Christine who is telling her story directly to a rural preacher, in the fashion of a confession, though the minister is not Catholic. Meyer sometimes alternates the three narratives and sometimes sticks with one for an extended period. The looseness of that aspect of the structure is used to good effect, whereas constant alternation would have been tedious after a while. And the delayed revelations about what's happening (and delay is after all the major function of good plotting) are more effective for the disappearance of some of the characters for large-ish portions of the story. Like the three previously translated novels by Meyer (Dead at Daybreak, Dead Before Dying, and Heart of the Hunter--though none of the titles correspond to the original Afrikaans titles) provides a fascinating tour of contemporary South Africa, particularly its most beautiful city, Cape Town. I've reviewed the other novels here, if you're looking for info about them, and if you want a brief visual tour of Cape Town, it's partially the setting for the film version of Mankell's White Lioness, the only one of the Wallander movies available on DVD in the U.S. (that seems to be the case for the U.K. as well). As in Meyer's novels, the view of Cape Town through Wallander's eyes includes the beauty and the ugliness (though Wallander's tour is a bit out of date, being very close to the end of apartheid). Back to Devil's Peak--the novel drew me forward through the strength of the characters and the power of the plotting, and surprised me at several points in that most effective novelistic manner: making me see the "truth" about what had happened before. Highly recommended (which goes for Meyer's earlier novels as well). He has a new novel called, I believe, The Invisible, that is in the process of translation now (about a white-trash bodyguard in the new South Africa), which I'm looking forward to eventually reading.
Posted by Glenn Harper at 9:08 AM