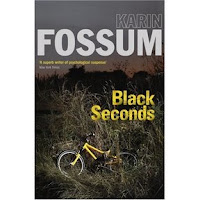 Karin Fossum's newly translated Black Seconds seems to be the fulfillment of the clever and effective false start of her first novel to be translated (actually the fifth of her Inspector Sejer series), Don't Look Back. In that novel, everyone thinks a very young girl has been abducted, but the search party discovers instead the body of a teenage girl. That initial twist away from a particular kind of crime novel, the child abduction, and perhaps Fossum has been waiting to write that story since using it as such a clever feint earlier in her distinguished career. But there are twists here as well. Fossum is frequently compared to Ruth Rendell, and there is certainly some common ground there, particularly in Fossum's close attention to family dynamics and their attendant horrors. Fossum's novels are not whodunits. In Black Seconds, for once a literal translation of the original Norwegian title, we know early on who the likely perpetrators are: but there is considerable tension built up around the questions of what exactly happened, and why (also the key questions in most of Fossum's other novels). Fossum's sympathy for her characters is another key aspect of this series: she wants to understand the people, criminals and victims alike, as much as the what and why of the events. In Black Seconds, even the people responsible for the violence to the missing girl are eligible for Fossum's considerable sympathy, and ultimately ours. Fossum is also skillful in constructing the books, using parallels (in Black Seconds some of these have to do with silence or a choice not to speak) to create a well-formed tale. At least one of the earlier novels in the series, Calling Out for You, verged on gothic horror (without the metaphysics), but Black Seconds is a return to the bleak realism of which she is a master (mistress?). The Scandinavian crime wave seems to specialize in bleak emotional landscapes, and Black Seconds qualifies for inclusion in that category, but Fossum imbues the tale with humanity, and in the ending, even a little glimmer of hope for a positive future for some of her characters. About the plot, for those who are interested: a beautiful little girl disappears, an autistic middle aged man on a three-wheel-truck is glimpsed by the mother, out looking for the girl, and the mother's sister sits worrying at home while her son arrives home disgruntled because he's just dented the fender of his new car. All the elements are already in place, and the rest of the novel follows each of those characters as well as the police (detective Sejer and his uniformed younger colleague Skarre) move slowly forward in piecing together the facts of the case. Another thing the Scandinavians (since the estimable Sjöwall and Wahlöö) seem to be good at following the police in a systematic investigation that moves forward in fits and starts, giving the northern romans policiers a particular rhythm and style. Black Seconds qualifies for the top rank in that company.
Posted by Glenn Harper at 11:24 AM