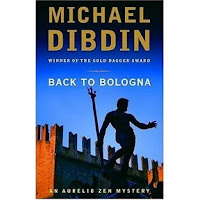 Not being a Dibdin fan (something about the writing has always irritated me), I'd noticed the publication of his last novel--but instead picked up the previous one when I noticed reviews that talked about Back to Bologna more as a comic novel than a crime novel. One of Dibdin's satirical targets is semiotician-novelist Umberto Eco, surely too easy to lampoon these days both for his novels and for semiotics as a postmodern profession past its prime. For some reason, the scholarly literary references (even in fun) in Dibdin's novel seems forced, whereas a passing reference to Italo Svevo (without mentioning that author's name) in Carofiglio's The Past is Another Country seemed natural and unforced--simply a shorthand description of the character's state of mind, in terms that would have come naturally to the university-educated character himself. As italian-mysteries.com has pointed out, Dibdin also indulges in a bit of insider humor by naming two characters with, alternately, the first and last names of the chief characters in his chief "competitors" novels (those of Magdalen Nabb and Donna Leon. Which leads me to the topic of Italian crime stories written by Americans and Brits who live (or have lived) for a time in Italy. The temptation is plainly difficult to resist: setting a novel in Venice or Florence (or all over Italy, as Dibdin does) is clearly more appealing (and probably more marketable) than setting it in Akron or Bradford. For readers of noir, perhaps Akron or Bradford would be more appropriate settings, though. I've referred to this phenomenon in its more egregious manifestations as "tourist noir," though Leon and Nabb lived in Italy long enough to escape that title. Dibdin did live in Italy for some time, but I believe he wrote the novels from a safe distance, in Seattle. Much of the comedy (and the plot) is derived from portraits of celebrities (the semiotician is balanced, in the plot-thread concerned with him, by an equally lampooned celebrity chef) and other "big" people, rather than from the life in the streets that I find more appropriate fodder for crime stories, even comic ones. See, for instance, the very funny crime novels of Donald Westlake, focused on small time criminals, not presidents and media types. Maybe I just have a tin ear for celebrity satire, or maybe it's not a format that translates into the crime genre very well. Regardless, there isn't quite enough crime to balance the comedy in Back to Bologna, and though there are several appealing new characters (including a lampoon of a private detective, a curiously naive Albanian immigrant--though she says she comes from Ruritania, the comic-opera locale of her favorite novel, also the source of her student-lover's name--and some local cops) there are a few too many characters and subplots, so that the whole thing comes off as a shallow skimming of the possibilities of Bologna (better seen in the excellent Night Bus, which manages crime and humor in Bologna in big enough quantities to far outshine Back to Bologna). But Dibdin's Bolognese book does have some things to recommend it: his brief descriptions and evocations of Bologna are apt and colorful. And when the narrative finally settles down briefly into the investigation of the ostensible crime (the murder of a football-club owner) the dialogue among the cops and Zen's progress through the city are a suggestion of the crime novel this might have been. But the crime and the investigation collapse under the farce and the metafiction (the Eco character proposing to write a crime novel called Back to Bologna, starring a detective named Nez...). Flavia the Ruritanian herself refers to the plot as "silly intrigues," so perhaps Dibdin the metafictional author was himself aware of the shallowness of the farcical elements of his plot.
Posted by Glenn Harper at 12:09 PM