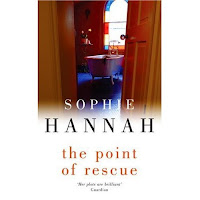 Sophie Hannah's new crime novel (her third) is scheduled for release in the U.K. in early February. It's a hybrid, and the combination is highly unusual: the novel is an amalgam of a paranoid-threat thriller, a comic harried-housewife novel, an emotionally-damaged-cop novel, and a couple of other things. One of the substantial accomplishments of this book is that it remains funny even as the reader realizes that what he or she has been laughing about is at the same time the heart of the very tense threat-plot. There are several elements in the story, separated by narrative style. The first person narrative is that of Sally, who is at her wit's end trying to cope with two jobs, a clueless husband, and a couple of demanding young children--and suddently seems to be pushed into the path of a bus. Cleverly paired with Sally's narrative is a diary by a woman who was found dead in a bathtub (her daughter also dead, in another tub). The diary's narrative is an extreme version of Sally's, puzzling the police in its negative (even violent) thoughts about the child that the diarist, a stay-at-home mother, was raising until they died. The police have mostly accepted the idea that the mother drowned the daughter and then slashed her own wrists, after dosing them both with a date-rape drug. But Simon (the detective who, along with his Sergeant-partner and sort-of love interest Charlie, are the running characters in Hannah's series) can't see it as a murder-suicide. The police strain of the book is told in the third person, mostly but not entirely from Simon and Charlie's divergent points of view--the other cops are differentiated by various characteristics but never really as alive as Simon and Charlie (or Sally and Geraldine, the dead mother). And Sally sees Geraldine's husband, Mark, on TV, but she knows that the man she sees is not the "real" husband, since she'd had a brief affair with Mark during which he'd told her all about Geraldine and their daughter (while she's complaining to him about her own family situation). Hence the paranoid plot--if this is Mark, who was it she spent a week with last year? And if she knew the real Mark, who's the guy on TV--and did one or the other of them just try to kill her? All of that sounds complicated, but Hannah is very good at keeping all the plots going--and as the tension increases, she's also good at building up the reader's interest only to suddenly shift into one of the other plots. There are elements of this book that refer to genres that I don't care much for (the cozy or traditional mystery, the threatened-woman thriller), but Hannah uses the cops to bring everything together in what is not quite a police procedural, and not quite the new-wave crime novel, and not exactly a "literary thriller," but her own form combining all the elements above. She even manages a bit of postmodernist metafiction (without being obvious or obnoxious about it): part of the plot depends on the diary being an unreliable narrative, but also on the detectives finding its author a believable character--the detective, within the story, acting as a literary critic to pass judgment on the quality of the writing of a segment of the book he's a character in... In some ways, The Point of Rescue reminds me of the much more low-key crime novels of Kate Atkinson, but in the end, as good as Atkinson's novels are, they're more literary works than crime fiction per se. Hannah's novel is more effective in depicting a crime and giving the reader a sense of the characters' endangered state, while at the same time seriously (though often comically) engaging serious issues (particularly the damaging expectations heaped upon women in family situations--the beginning of The Point of Rescue is indistinguishable from the beginning of a literary novel on that topic, even beyond the attempt to murder Sally, right up until the police narrative takes over and the extreme version of Sally's story, in the diary, casts that more conventional harried-mother story into stark relief. I highly recommend The Point of Rescue as an enjoyable crime novel that is at the same time funny and involving, and still manages to tackle serious social issues. One word about the "series" aspect: at first, the relationship of Simon and Charlie seems so complex and their history already so fraught with difficulties that a reader might think starting with the most recent of Hannah's three crime novels will be confusing--but in fact, the reader ultimately has all the information he/she needs to follow not only the plot of this book, but the plot of the Simon/Charlie relationship as well (you just have to be as patient in following their story as in pursuing the crime and motherhood plot).
Posted by Glenn Harper at 3:18 PM