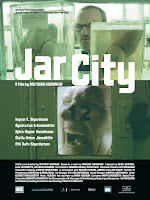 The Independent Film Channel has brought the film of Arnaldur Indridason's Jar City to U.S. movie screens (or at least to the Toronto Film Festival and to On-Demand cable, which is where I saw it). The film has the advantage of several other film series made from Scandinavian crime novels: the actors (though not exactly how readers might have envisioned them) disappear into the roles. Jar City features the land- and cityscape of Iceland in a way rarely seen by those of us who have only experienced the country through travelogues. Director Baltasar Kormákur presents a cold, nearly barren country full of brutalist modern buildings. but in the almost anonymous cityscape, everyone seems to know everyone else (perhaps a comment on the common ground of the police and their usual "clients"). the occasional older building with more character (a church, one house) stand out starkly against the bleak backdrop of both nature and culture. There is a duality of time in the film, two narratives that are converging toward the conclusion: they are differentiated not only by the angle of view on the central events but also by color, one warmer and the other cooler and bluer. Sigurdur Oli and Elinborg, the cohorts of chief detective Erlendur, behave very much like their counterparts in the novels. Erlendur himself is as cranky and anti-social as his literary other, but perhaps not quite so difficult. His daughter, an essential character in the series, is also slightly less aggressive in her problematic relationship with Erlendur in the film. The story is complex and as bleak as the landscape, but as in the book the viewer is pulled in, through the filmmaker's (and the novelist's) considerable sympathy with the cops, the murderer, the victims, the witnesses, and the human condition. That sounds like overreaching for a crime novel, but as with some of the other Scandinavians, the Erlendur novels are quietly ambitious in their approach to fiction and to crime fiction. Whether you already know the Arnaldur Indridason novels or not, the film of Jar City (or Myrin, which means "marsh" or "mire") will be rewarding and moving--plus creepy and at times disgusting. The culinary habits of Icelanders are very much in evidence, along with various forms of decomposition (readers of the novel will know what to expect from this story, along those lines, even more than subsequent Erlendur novels). We can only hope that further films are made from the series (and that those of us outside Scandinavia will have access to them). Anyone else seen Jar City? If so, please let u s know what you thought, and also what you know about the possible future of films based on Arnaldur Indridason's novels.
Posted by Glenn Harper at 12:35 PM

the film at the Courmayeur Noir in Festival fest in Italy last December. Both excellent and faithful to the book.

Arnaldur also approves fully of it.

I wonder if there is a DVD available? buy a

Post-existential noir; I thumbnailed it for my kids as having classic Ross MacDonald new crime leading back in time to an original sin structure; with the Shakespearian subplot of Jar City eerily mirroring the alternative plot line that lights on the search of one young man looking for computer data while his child suffers a painful death in the hospital; and who at first appears to be an avatar of the lead;

Father's and daughters; mothers and sons; and their fragile connections in a land so bleak that Ingmar Bergman's characters come to mind ;more gentle in their comparisons to these cold angry Icelandic figures forced into holding onto each other for purchase among these frozen and volcanic islands at the top of the isolated world.

I am in the process of watching it right now. I bought a streaming version through Amazon. They also have a DVD available on the US Amazon site. It is here. https://www.amazon.com/M%C3%BDrin-Nordermoor-NON-USA-FORMAT-Reg-4/dp/B01DRYS7BE/ref=sr_1_5?ie=UTF8&qid=1488744491&sr=8-5&keywords=jar+city.

I hope to see a good movie. If I have time, I´ll come back afterwards and post some more!