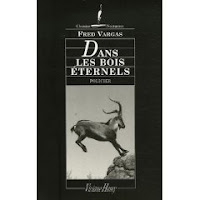 Reading in close sequence the latest books in English translation by French female crime writers Dominique Manotti and Fred Vargas is an interesting experience. Both authors are distinguished scholars in other fields, and both use considerable chunks of French history in their stories. But where Manotti's books are very much "placed" in recent social history, Vargas's books float in an alternate universe of imagination, a world that shares certain points with ours (including, in this case, natural history, a rivalry between 17th century poets, French regional rivalries, ghosts, reliquaries, and medieval magic), but it's a world in which "cloud shovelers," as her chief detective Adamsberg describes himself, are more able to cope than the realists or positivists. The story develops slowly, without a clear trajectory until well into the novel, and there are more unexpected revelations here than in Vargas's other novels, almost in a Holmesian fashion. But you don't read Vargas as much for the plot as for her distinctive voice. What other crime novelist could depend on a policeman (a new cop in Adamsberg's unit) who frequently speaks in Racinian Alexandrine verse (which I imagine was the devil to translate into English, since twelve syllable Alexandrines are very far from the Shakespearean iambic pentameter that is more natural in English). The other characters do take note of peculiarity of speech, but they absorb the oddness along with all the other strange people and events that populate Vargas's Paris. Vargas shares something with the fantasy novels of French intellectual Jacques Roubaud, which technically revolve around crime but are set in an imaginary world of lightness and wish-fulfillment. Vargas's stories are not as light (there are bloody murders of both people and beasts in This Night's Foul Work) but there is also a gentle comedy and a series of discrete, almost ethnographically defined communities into which the reader must enter wholeheartedly to appreciate the books. This is not the noir of classic film noir, nor of the American novels that French noir filmmakers so admired. This world is a dark and funny descendant of Sherlock Holmes's mystery-adventure stories, but with gender roles and other social conventions both updated and creatively confused. I must admit that I find the serious and deeply political novels of Manotti more deeply satisfying than the lighter and more satirical fictions of Vargas; but Vargas exploits the profound power of fiction itself to create an experience that draws the reader into a rich, vivid, and unique world of eccentric characters, bizarre murders, and a sensibility that is close to classic South American magic realism.
Posted by Glenn Harper at 5:32 PM