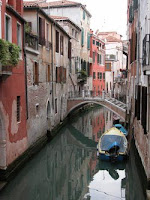 I've been reading Donna Leon lately, preparing for a quick trip to Venice in a couple of weeks (I'm speaking at a conference there on December 12th), and tonight I also watched the quintessential movie of wintry Venice, Don't Look Now, directed by Nicholas Roeg and starring Donald Sutherland and Julie Christie (from the mid-1970s). First, the movie: I don't know of another film that is told almost entirely with visual elements. The dialogue is often quiet and always oblique, sometimes in Italian with no subtitles. The original short story by Daphne DuMaurier provides only a suggestion of a story, and Roeg fills it out with visual metaphor, such as the frame I'm pasting in here, showing a blotch on a photo of the inside of a church--a blotch that is extremely important visually in the film but impossible to explain in any rational, linear narrative. 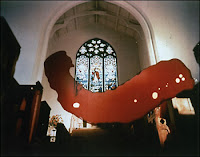 Venice is a central character, with its narrow, dead-end alleys, winding canals, and propensity for getting you lost. Don't Look Now is a horror story, a detective thriller, and a story of love and loss, but all of the above are told obliquely, almost off-stage, building slowly to a violent conclusion that is related to what's gone on earlier mostly in overlapping images. I can explain further, but too much explanation ruins the fragile structure (and pleasure) of the movie. I have a personal connection to the film, as well: When my wife and I were as young (and skinny) as Sutherland and Christie in the film, we were standing at the Accademia stop on the vaporetto (water bus) line in Venice and saw two magnificent funeral boats (all shiny black, with gold trim) pulling up to the dock, where a film crew was waiting for them. A year or so later, when we went to see Don't Look Now, we saw the scene again, in the movie--this was what we saw being filmed, without knowing. My connection to Donna Leon is more off and on. I was a big fan when she was first published in the U.S., and desperate to get her newer books in the period when she had a dispute with her American publisher and was unavailable here. When the books started becoming available again, I lost interest a bit, somehow finding the typical pattern of the novels (ineviably ending with cynicism about the possibiltiy of justice rather than any more typical "satisfying" conclusion to her the story. But I've started reading her again, rereading the early novels and catching up with the newer ones, and I have to say that she is both unique among crime writers and head and shoulders above most. No one has evoked the physical and social reality of Venice as well as Leon, and her plots are as devious and twisting as the streets and canals of the city. her cynicism (or that of her detective, Guido Brunetti, are the logical outcome of not only Venice and Italy but also a world that was rapidly globalizing as she has been writing. The comedy of the novels also seems to me now to be a more essential element, not only the dark comedy of the bleak conclusions but the brighter comic touches in Brunetti's interaction with his grasping, incompetent boss and his own lively (and more sympathetic) cohorts Sergeant (and then Commissario) Vianello and Signorina Elettra (plus his vividly drawn family). I won't talk about any specific novels now, I'm interested at the moment in acknowledging her importance to the field of crime fiction and the unique pleasure of reading her stories. If anyone has any other suggestions as to the best (out of the many) crime novels and films set in Venice, please post them here--I'd love to find other examples, though I'm also happy to stand behind my opinion of the film and the author I'm proposing as two of the very best examples.
Posted by Glenn Harper at 7:27 PM

I think I saw that when I was young, it's a vague memory. Now you've enticed me I will have to look it up.