From what little I knew in advance, I expected Michael Genelin's Siren of the Waters, featuring Bratislava detective Jana Matinova, to be an East European police procedural--it's not that. Instead, it's a combination of that procedural with a Fantômas-like adventure, plus a post-Bond/post-Cold-War spy thriller (think of movies like The Transporter), and threaded among all of the above, a Milan Kundera-like story of Communist-era Czechoslovakia. No single thread dominates, with the result that the villainous conspiracy Jana gets involved in (concerning human trafficking) never quite comes into focus, but we hardly notice as the action shifts from Bratislava to Kiev to Strasbourg to Nice (at Carnival, no less), culminating in a costume ball (Carnival and the costume ball being part of what suggests the elegant crime novels of the early 20th century, including the Fantômas stories, as well as Bond). Just exactly why Jana gets pulled in all these directions is not all that clear, and there are lots of coincidences, but the whole thing is enough fun (among all the violence) to pull the reader along rapidly. Basically, Jana and her incompetent warrant officer, Seges, are called to an accident scene and find a number of female corpses plus one male corpse. The makeup of the group of victims suggests a pimp and prostitues, and following that lead brings Jana into a pan-European investigation of trafficking and into the view of at least two international gangs (as well as into the company of a detective in the Ukraine, a Russian cop, his sister, Jana's estranged daughter, and a bunch of people connected to the U.N.). 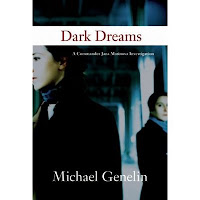 It takes a certain suspension of disbelief, and it's not a gritty urban noir (though it does have a dark sensibility), but having just read this first entry in a new series, I'm looking forward to next year's Dark Dreams, which promises to be just as wild a ride. There are some aspects, though, of the conclusion of Siren of the Waters that were not quite satisfactory to me, regarding both Jana's personal life and the final "reveal," though I can't really explain my reservations without giving away too much. If there's anyone reading this who has already read Siren of the Waters, I'd appreciate hearing from you what you thought of the book, and in particular of the ending--thanks in advance for your comments.
Posted by Glenn Harper at 4:59 PM

Hi Glenn, I have now reviewed this book at Petrona
http://petrona.typepad.com/petrona/2010/01/book-review-siren-of-the-waters-by-michael-genelin.html

Norman of Crime Scraps has also reviewed it at Euro Crime (link in my post).

The ending...hmmm. My summary: character of Jana and the Slovakian aspects, good; international crime ring and the "siren" aspects, plus ending, poor.