Echoes from the Dead, by Johan Theorin 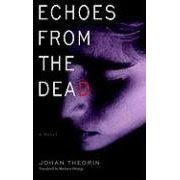 There's been a lot of positive press about Swedish author Johan Theorin's debut novel, Echoes from the Dead, so I don't need to provide a lot more of the same--suffice it to say that it's a very good book, and quite different from most of the rest of the Swedish crime wave. It's set on Öland, off the coast of northern Småland, a mostly rural area. There are elements of the amateur detective story and the cozy (a grandfather living in an assisted living facility is investigating the disappearance and probable murder, 20 years earlier, of his grandson. But there are also elements of the psychological crime novel (the missing boy's mother is the initial focus of the novel, in her self-destructive obsession with her son) and of the serial killer or pedophile story. But what's distinctive is that Theorin is looking for an equivalent for the folk tale or ghost story within the framework of a realistic crime novel. The "troll" of the book is Nils Kant, a murderer who disappeared decades earlier but remains in the community's memory as part ghost, part "boogey man," and possible child murderer, with rumors that he is not actually buried in his coffin in the graveyard. Ghosts seem to occupy his deceased mother's abandoned, decrepit house. The "alvar," te grassy plain of the island, becomes a haunting character itself. The chapters of the book loosely alternate among the perspectives of the mother, the grandfather, and the troll. There are a number of references to second sight and other paranormal perceptions, but more as metaphor than as plot points. The reader's perception of all three of the main characters shifts as we know more about them: the mother becomes less obsessed, the grandfather less senile, the troll more human. Gradually, as if in a focusing lens, contemporary reality takes the place of the ghosts, trolls, and animism that are close to the surface at the beginning and become metaphorical tropes by the end. In a sense, Echoes from the Dead is about storytelling, and more than once, the grandfather draws out the narrative of his investigation as he talks to his daughter, and delays also the reader's knowledge of his suspicions regarding past events. The final step out of fairy tale menace into ordinary human motives may be a bit startling, and a reader's satisfaction with the conclusion may depend on his or her expectations along that myth-mystery scale. But Theorin's tale is a complex intertwining of a straightforward story of loss, a rational investigation of the past, and a passage through the nightmare world of the old stories--it's fascinating to watch the story twist and turn through all of its facets. Theorin is another in a seemingly bottomless pool of sophisticated and effective Scandinavian crime writers.
Posted by Glenn Harper at 5:57 PM