A Not So Perfect Crime, by Teresa Solana 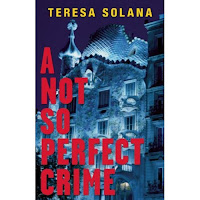 Do most readers look at reviews or blurbs or the descriptive copy on the back of a paperback (or the inside of the dustcover of a hardback) before starting to read a book? I try not to, because I like to be surprised, and I like to discover the characters in the midst of their own world rather than in the "outside world" of a reviewer's (or a book promoter's) notion of who they are. I didn't read much about Teresa Solana's newly translated (from the Catalan, by Peter Bush) before I read the novel, but I found myself looking at reviews after I finished reading it (something I usually don't do until I've given some thought to what I might say about the book in a review myself): A Not So Perfect Crime does not fit neatly into any category of crime fiction, and the particular pleasures of reading the book are not easy to describe or to pin down. At one level, the book is a lot of fun, with some very telling Hitchcock references, for example, and in numerous passages, Solana gives a very palpable sense of walking through Barcelona and walking into various kinds of uniquely Barcelona rooms and buildings. Solana's book is on the one hand a straightforward detective story, of the inexperienced-detective-in-over-his-head type. Eduard and his fraternal twin brother Pep (who adopted a new identity under the name Borja) have struggled into middle age, each in a different way, Eduard (the narrator) leading a conventional office-worker's life with wife and family and not quite getting to the end of the month on their paychecks; Borja arriving in the novel's present and back in Barcelona after a more bohemian life traveling around Europe and the world. Borja has convinced Eduard to both keep concealed the fact that they're brothers and join with him in an unincorporated, unlicensed business specializing in discreet investigations. What follows is an intriguing satire of Barcelona society and politics, as well as a serio-comic crime story leading from a politician suspicious of his wife to murder and an unlikely and unconventional success in solving the puzzle of the crime. But what pulls the reader forward isn't the puzzle: Eduard and Borja (plus Eduard's wife Montse, Borja's romantic attachments, and various characters from Catalan high and low society) are great company, and the writing is lucid and impeccable--and Eduard's voice as narrator is that of an ordinary guy who's gotten himself into a situation he can't control. There is a farce lurking in the plot but Solana doesn't foreground it in the way that Ottavio Cappellani does in his Sicilian Tragedee; Solana's switched paintings, blackmailed politicians, and hidden identities remain tantalizingly under control, subservient to an almost matter-of-fact, naturalistic style. The central characters are in some senses right out of the hard-boiled detective playbook, but they turn out to be fascinatingly normal, three dimensional rather than clichéd. And the jealousies, strategies, and crimes are the stuff of daily life and conflicting social class rather than the overheated stuff of serial killers or international conspiracies: Solana's writing is cool and straightforward and her plotting and characters are right off the ordinary streets, schools, political offices, and new-age clinics of a contemporary city (albeit a unique and fascinating one). Some of the elements of farce do resolve themselves in subtle comedy, and others remain cloaked in secrecy: did Borja change his name only to masquerade as aristocracy (there seems to be more to it than that); why does Borja refuse to let Eduard tell even his wife that they're related? Such basic conundrums suggest the beginning of a series (which I'd wholeheartedly welcome), in which the mysteries would play a part (or find a solution), but they also give the novel as it stands a depth beyond its glimmering surface. A Sicilan Tragedee is a laugh-out-loud comedy of modern but murderous manners; A Not So Perfect Crime is a wry, subtle comedy of satire and character, that also manages to be a noir crime novel that comments on the mores and morals of 21st century Spain. Solana's book is a great complement to the other outstanding Barcelona crime novels that have been translated, from Manuel Vázquez Montalbán and Alicia Gimenez-Bartlett (who both write in Spanish) to Maria Antonia Oliver (who like Solana writes in Catalan, but whose only Barcelona mystery to be translated is Study in Lilac). More of Vázquez Montalbán has just come out in English from Serpent's Tail, and Europa Editions has been steadily adding to the Gimenez-Bartlett novels available in English, and now Bitter Lemon has given us Teresa Solana's first book. Can we hope for more from Barcelona, from these and other writers?
Posted by Glenn Harper at 4:46 PM