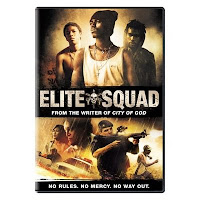 During the Washington DC leg of his recent book tour, Leighton Gage said a couple of things that illuminate Brazilian crime fiction as a genre. One was that there isn't a highly developed tradition of crime fiction in Brazil: most best sellers are self help books. Brazilian author Patricia Melo's In Praise of Lies, reviewed here a couple of months ago, shows a crime writer turning to self help writing in order to make it big--reinforcing Leighton's comment about the book trade in the largest South American country. Another thing he mentioned was that if you want to get a picture of the country, you can't do better than the recent Brazilian film Elite Squad (Tropa de elite, directed by José Padilha). I picked up a copy of the DVD, and it's a powerful, difficult-to-watch crime story told in a documentary style (somewhere between Battle of Algiers and The Wire). We follow two rookie police lieutenants, Neto and André, who discover the rampant corruption in the Brazilian police. Looking for something better, they end up in the "flying squad" type unit of the movie's title: part SWAT, para-military, and above corruption. The film's narrator is Captain Nascimento, who is desperate to find a replacement for himself so he can get out of the dangerous and demanding unit. André is getting a law degree and witnesses the casual acceptance of the drug gangs by his fellow students, who buy from them as well as getting permission from the drug lords to operate a social service organization in their favela, or slum. The rookie goes through a series of disillusioning experiences that separate him from these privileged students, driving him into a radical position as a cop as ruthless as the drug lords (there's considerable parallel between the violence of the bad guys and that of the good guys, which reaches an extreme (in both cases) at the end of the movie. There has been some controversy about the movie glorifying or justifying the violence of the police against the poor, but that argument is actually raised by the students in a way that doesn't trivialize the argument. In fact, the parallel drawn between the violence on both sides (and the acquiescence of the "civilians" in both the favelas and the rich districts) is carefully maintained. This is a skillful portrait of a society at the edge of chaos, at the point that Yeats envisioned in his most famous poem: things are indeed falling apart and the center is not holding. Corrupt cops are personalized in a direct and often comic way, as they compete with one another for territory in various protection rackets. The movie is not for the faint-hearted. We are lulled into the sense that the violence is not going to be that bad, and then we are hit with the full grim reality of violence. There's also a "boot camp" section when the rookies are put through training that is both macho and disgusting. But a tamer vision of what's going on wouldn't be as convincing emotionally. Thanks to Leighton for the recommendation, and I can pass the advice along (with fair warning).
Posted by Glenn Harper at 6:59 PM

Hi Mate,
I'm in Paris at the moment.
So I haven't checked in on your site as often as I am accustomed to do.
I'm delighted that you went to the trouble to check out Tropa da Elite.
Part of my mission: telling people about Brazil as it is.