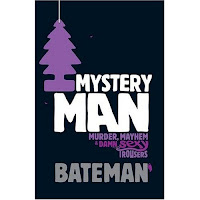 Dan Starkey, the anti-hero of Colin Bateman's series crime novels (he also writes stand-alones) is a feckless magnet for murder and mayhem, especially as played by David Thewlis in the 1998 movie of the first Starkey novel, Divorcing Jack. The unnamed narrator and central character of the new novel (the author has re-christened himself simply Bateman) conjures up visions of Starkey and Thewlis but to an exaggerated extreme: we learn gradually, and with accelerating speed, that the monologist-narrator is hyper-medicated, allergic to everything, afraid of human contact, paranoid, and has read far too many crime novels. There's a whiff of metafiction--the narrator is the owner-operator of No Alibis, a bookstore in Belfast specializing in crime fiction, and there really is just such a store, in the exact same location, though reportedly the owner bares absolutely no resemblance to Bateman's hero--and the varied plot includes a great number of punctured crime-fiction cliches as well as numerous references to classic and current mystery fiction (as well as a very funny portrait of a certain Irish literary figure who has begun issuing crime novels). A private detective whose office is next to the fictional bookstore disappears, and his clients start asking the bookshop owner for assistance in locating, among other things, a graffiti artist painting insulting comments and a pair of leather trousers purportedly lost by a dry cleaning shop. Then he's lured (very reluctantly) into the case of a missing woman who is the wife of a publisher (of literary rather than genre works) and sets off on a very paranoia-inducing trail that includes a couple of beautiful women (one of them a jewelry store clerk that the narrator has been for some time spying on), Nazis, Holocaust survivors, dance teachers, a useless bookshop clerk, book fairs, an auto dealership, a police detective, a car chase, and a writers' retreat. Along the way, Bateman has a lot of fun with the conventions of the mystery genre, the relationships among writers, publishers, and readers, and the nebbishy character of the lustful, aggressive, shy, obsessive-compulsive hero-narrator. The book is fairly long (just over 400 pages) but the type is very big (approaching the Large Type font for the visually impaired) and moves very quickly from an "amateur detective" story to the thriller plot and at the end, a tantalizing hint of a different kind of story altogether. Bateman's last novel, Orpheus Rising, was magic realism rather than crime fiction, and in the new one, he has come back to crime with a comic vengeance (most of the vengeance seemingly directed toward the standard techniques of crime writing and toward the narrator himself). Reportedly, Bateman is at work on a sequel titled Day of the Jack Russell, and that title gives a flavor of the hijinks as well as the reflexive quality of Bateman's crime writing (whose subject is crime writing) in what may be a new series. Good news, since Mystery Man is the funniest crime novel since Bateman's own Divorcing Jack and Cycle of Violence.
Posted by Glenn Harper at 12:06 PM