Dark Times in the City, by Gene Kerrigan 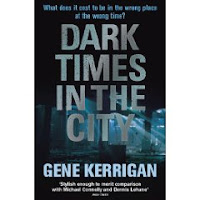 Gene Kerrigan's new Dark Times in the City is slightly less tightly structured than his first two crime novels, Little Criminals and Midnight Choir but shares with them (and with writers like Elmore Leonard) a natural but unexpected flow of events and a natural alternation of comedy and moral dilemma (like life). There is a sort of "flash-back" section that explains and clarifies some of what's been going on, and the whole plot has an inevitable quality without seeming like a clockwork-machine. The Celtic Tiger has disappeared and Dublin's criminals have had to adjust to new, straitened circumstances. The cops, though always present in some sense, are more marginal in this book than in the first two. Danny Callaghan, not long out of prison, steps into the middle of a gang murder that has nothing to do with him and launches a series of events that will threaten him and everyone around him (ex-wife, barowner friend/employer, and even peripheral acquaintances). Gangster Lar McKendrick (from the earlier books) makes another appearance, as well as the gangster whose cousin was killed by Callaghan (the incident that put him in jail). The plot twists and turns repeatedly, overturning every cliche that the reader thinks is appearing on the horizon, with Callaghan always coming back into focus. Callaghan is the closest thing to a "hero" or even a central character in Kerrigan's hitherto crowded and morally ambiguous fictional universe, and he's likable and capable without ever becoming an action-hero of the sort that populates any number of thrillers. Such characters are capable of unbelievable feats of martial arts skill, but there's nothing unbelievable about Callaghan or anyone else in the book. Just as one example, I've mentioned a couple of "buried-alive" plots in recent posts, and that trope recurs in Dark Times in the City, but in a fashion that is totally believable (unlike the burial and revival in The Girl Who Played with Fire, which the reader just has to accept as inevitable and as a natural part of the romantic-thriller quality of that very popular Swedish novel). Kerrigan uses a clean and uncluttered style of writing to tell a true and fast-moving story. Dark Times in the City lives up to Kerrigan's own very high standard of crime writing: urban neo-noir of the very highest rank.
Posted by Glenn Harper at 9:50 AM

Excellent, insightful review. I recently read this book and share your high opinion of it. Written with his particular poetic economy. I think he's a little bit like Michael Connelly in how he uses his journalism experience to inform his novels. Highly topical and Danny is a really likeable character. I found that the book fell apart a bit at the end, but never mind. I loved it.