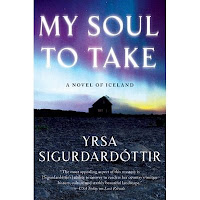 The last decade or so of the economic boom in Iceland saw the growth of a remarkable literary crime wave (especially for so small a country). Arnaldur Indridason is widely known outside of Iceland for his series featuring Inspector Erlendur and Yrsa Sigurdardóttir's second crime novel has just been published in English (translated by the late Bernard Scudder and Anna Yates), and I'm hoping that Árni Thórarinsson's urban noir novels, very succesful in Europe, will soon make their way into English (I may have to brush up on my French if there's not an English translation soon, since Thórarinsson is widely available in French translation). Sigurdardóttir's first two novels are matched opposites, in a way. They both feature attorney Thóra Gudmundsdóttir, but they're more mysteries than legal thrillers. The pattern in both is that of an amateur detective thrust into an investigation by Thóra's involvement in a legal matter. But the first novel, Last Rituals, is a college novel as much as a mystery, and is set in an urban environment. Last Rituals has a serious gothic quality based on the subculture of "urban primitivism," myth, ritual, and sadism inherent in the plot. The new book, My Soul to Take revisits the Gothic realm and revivals of myth in contemporary life, but in a lighter, frequently comic, and rural vein. 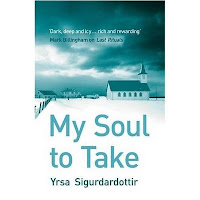 Thóra is called to an isolated hotel-retreat designed to appeal to devotees of new-age mysticism (there's an "aura reader" on staff), because the owner of the hotel, her client, is claiming the locals who sold him the property owe him compensation because the site is haunted, and that fact wasn't disclosed in the sale documents. That unconventional legal matter sets a tone of skepticism (on Thóra's part) and comedy (on the narrator's) that continues through gruesome deaths, genuinely horrible events in the past, and Nazi connections (Thóra's German boyfriend says "God, the bloody Nazis…They always turn up sooner or later," a complaint I share, regarding crime writers' frequent resort to the German past). Where Last Rituals was ultimately a fairly straightforward (if somewhat louche) story, My Soul to Take is very complicated, with lots of red herrings (Thóra's client is accused of murder and she keeps coming up with alternative theories of the crimes) and lots of characters (most of whom seem to be suspects). The setting is a variation on the archetypal English country house, and the plot has some aspects of the locked-room mystery (because of a blocked road). Ultimately I found myself pulled along by the engaging Thóra, her mess of a family, and her lover Matthew (returning from Last Rituals) than by the twists and turns of the plot. The resolution seems to be simply one more of the various crime scenarios that have preceeded it, no more or less plausible than any of the others, though the climax is suitably wrapped in a foggy, atmospheric scene. A horrible crime that is shown in the first pages of the book is rediscovered at the end and resolved in a moving way. The Indridason books are more satisfying to my noir-inflected taste in crime fiction (as I expect the Thorarinsson novels will be) but Yrsa Sigurdardottir's two translated novels are a worthy addition to the Icelandic crime wave washing up on English-speaking shores, particularly in the character of Thóra and private life, very different from Erlendur's (as I mentioned in my review of Last Rituals). One minor point for discussion: the U.S. (at the top of this review) and U.K. (in the middle) covers for My Soul to Take offer very different views of the landscape and setting of the novel--does anyone have an opinion as to which is more effective or more appropriate?
Posted by Glenn Harper at 9:48 AM

The cover with the church is very misleading, as in the book the church is specifically described as blackened with tar (not uncommon in old rural religious buldings of Scandinavia). I would say the American cover is much better designed, more reflective of the landscape described in the book, and, in the least, not misleading.
Cheers,
George H.