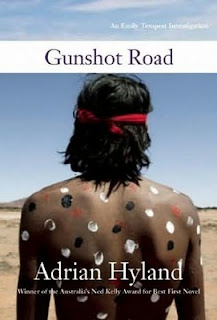 Australian Adrian Hyland's two "Emily Tempest Investigation" novels differ from Peter Temple's novels of Australia in a number of ways: Tempest is a half-Aboriginal woman who frew up in the Outback, left to travel the world, and is now back and looking for a "Centre," as she calls the region, of her own. The narrative is straightforward, and entirely from Emily's point of view. Where Temple's narrative is splintered by abrupt and slangy dialogue, Hyland's is more linear, punctuated by terms from local languages and mythologies. The mythologies are particularly important: as in his first novel (Moonlight Downs or Diamond Dove, depending on the country) the dreamings, songs (meaning much more than music) and divinities of the native people are taken seriously as an integral part of the community and the landscape. In Gunshot Road, maps are a particular focus, and not only those graphed on paper, along with a legendary figure who apparently buried under a collapsed mountain years before. Emily is more on her own here, and less of an amateur detective. She has been hired as a kind of auxiliary police officer, in training in the town, and only occasionally in touch with the people of her village (where much of the crucial action took place in Moonlight Downs). She's adrift, and uncertain about which of the townspeople, miners, suspect, police, victims, and even a Chinese artist she can trust. The mystery isn't so much the point of the book as the texture of Emily's world, and it's a rich adventure even without the action that erupts (mostly right on top of her) occasionally. She's an appealing and (something to remark upon given the gender difference between author and character) believable character, and the series reveals a very different facet of the Australian experience from the others in the crop of the current, remarkable burst of creativity in Australian crime fiction (not only Temple but Garry Disher, Shane Maloney--whose most recent Murray Whelan book I've just managed to get hold of), and many others whose names you can browse here, at the Australian Crime Fiction Database.
Posted by Glenn Harper at 3:18 PM

Glenn,
Swap out Temple for Tempest in the post colon sentence in the first paragraph...

Oops, thanks for the correction. Sometimes I type faster than my brain works...