Village of the Ghost Bears, by Stan Jones 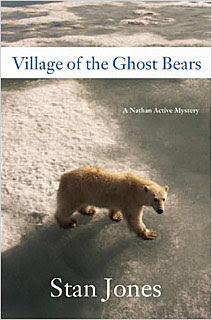 The third novel in the Nathan Active series by Stan Jones, Frozen Sun, was almost urban, with its themes of prostitution, rape, and despair. The new, fourth, novel, Village of the Ghost Bears is back to the tundra and the town of Chukchi, the primary settings of the first two Active novels. Nathan, for those unfamiliar with the very interesting series, is an Inupiat Alaska State Trooper who was raised in Anchorage and is thus an outsider in his own culture (the series begins with his being assigned to the town of his birth, where his mother still lives). The new novel begins as Nathan and his new girlfriend (the emotionally damaged Grace Palmer of Frozen Sun) are dropped off beside a remote lake for some r&r, but instead discover a body in the water and then get a message about a deadly fire back in Chukchi. What follows is a complex investigation involving a lot of bush-airplane travel (some of the suspects and a lot of the leads are in areas so remote that they're inacessible except by air). One of the pleasures of this series, very evident here, is the language, enriched by terms from the Inupiaq language, by the very local sense of humor, and by the varieties of local dialects of English. The characters (suspects and bystanders) in this novel include a very convincing schizophrenic twin, a resourceful bush pilot and his irascible wife, an ambitious Inupiat policeman, and a large number of interesting characters who are dead from the beginning (in the fire), plus the damaged Grace and Nathan himself, who is uncertain about where he belongs culturally and personally. Nathan's desire to get out of Chukchi and back to Anchorage, a persistent theme of the series, reaches a climax in a decision that confronts him at the end of the book. I usually only review non-U.S. crime fiction, but Stan Jones's Alaska is so different from the normal U.S.-crime-novel setting that I can't resist including his books, and his more-remote-than-rural locale is a unique environment for his sometimes very dark stories. The blend of Inupiat, Korean, Hispanic, white, and black population of Village of the Ghost Bears is lively and full of conflict--more than enough reason to seek out the Nathan Active novels.
Posted by Glenn Harper at 12:55 PM

I've enjoyed Jones' Nathan Active series from the very first book, so I was thrilled to see your post!

Anonymous said...
This comment has been removed by a blog administrator.
10:07 PM

Are you familiar with Arnulder Indridason? He's the best international crime fiction writer I've come across.

I also have a blog and I've added you as a link. Check it out sometime!