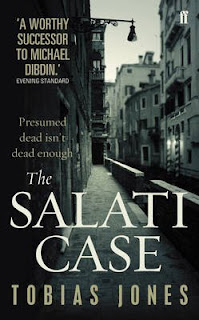 Tobias Jones is the author of a nonfiction book about Italy, through the lens of an Englishman, the author himself, who moved to Parma. His new detective series starring a loner private detective named Castagnetti is set in an unnamed city that is surely Parma (note the frequent references to the local ham), a locale that is vividly evoked (along with the nearby cities and towns, as the detective travels from place to place by car and train in pursuit of the truth about a man who disappeared 14 years earlier, while waiting for a train. The man's mother has just died, and a notary (a much more important official in Italy than elsewhere) hires Castagnetti according to the dictates of the mother's will, to determine whether the missing man (and her heir, along with his brother, of her estate) is alive or dead. Jones refers in interviews to his admiration for (and debt to) Ross Macdonald, and indeed the current detective novels that Castagnetti's story resembles most is Declan Hughes's Macdonald-homage series set in Dublin. But there is perhaps a bit more of Chandler's Philip Marlowe in Castagnetti, as well as Macdonald's Archer. Both Hughes and Jones portray broken families in the context of troubled societies, but Castagnetti is moodier, more alone than Hughes's Ed Loy. His only friend is less a personality than a property owner who hosts Castagnetti's beehives, and perhaps the most personal moment in the story shows the detective turning honeycomb into bee balm, a pot of which he presents to a charming but reluctant witness in an attempt to elicit information. The story is complex, and with a jaundiced view of Italian politics that will be familiar to readers of Italian crime fiction by natives and immigrant authors like Donna Leon (or for that matter readers of nonfiction and newspaper articles about Italy). The Salati Case is fairly short, 260 pages in an "A format," mass-market-sized paperback, but is a thoroughly fleshed out tale full of interesting characters. It's also less bloody than many current crime novels, though there is violence against murder victims and against the detective himself: Jones begins not with a corpse but with a missing person, and when he encounters violence against himself, it's in (somewhat delayed) response to a bit of detective bravado that the reader may find as just cause for the beating he gets. One quibble, and perhaps someone more knowledgeable than myself about Italian police matters can help with this: Castagnetti seems to be looking for his Carabinieri contact at the Questura; I thought that the national police were found at the Questura, while the Carabinieri, a military police force, had their station elsewhere. There's another Castagnetti case in the works, and it will be interesting to see where Jones takes his Parma detective. There's also another new detective series set in Italy (in Florence), by another English writer, Christobel Kent, whose A Time of Mourning (which shares a bit of pacing but not much in tone with The Salati Case) will be reviewed here soon.
Posted by Glenn Harper at 12:22 PM