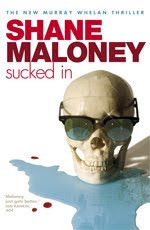 Australian author Shane Maloney has been compared to Carl Hiaasen but his books actually have more in common with Garbhan Downey's comic crime/political novels of Northern Ireland (though Maloney's comedy is a bit less manic than Downey's). It took me a while to get a copy of the 6th and most recent of Maloney's Murray Whelan novels, published a couple of years ago, but the wait was worth it. Though Murray (a first-person narrator) wise cracks as usual Sucked In is a bit more seriously political than its predecessors. The story begins with a body emerging from a draining lake (shades of Arnaldur Indridason, though in a much lighter vein) and continues with a detailed tour through the politics of the state of Victoria. It's nearing the end of the millennium, and Murray is now a member of the state parliament, and his Australian Labour Party is, as usual, out of power. Another death, related to the corpse in the lake, creates an opening in the federal parliament and party officials, national and local, are jockeying for position in the race to fill the seat. The murder mystery is at the center of the political struggle as well, but the book is really not a "Murray Whelan Thriller" as the cover blurb promises: there's a bit of violence and a bit of blackmail, but the focus is mostly on political matters. For anyone familiar with Murray, the political focus will be no surprise and no disappointment, but for those unfamiliar with his career, it might be better to start from the beginning (or perhaps with the pair of TV movies made from the first two books some years ago, intermittently available outside Australia, Stiff and The Brush Off). Once hooked, it's Murray's voice that will lead you on through his personal travails and (very occasional) triumphs. Plus some very funny sex scenes, particularly in the new book.
Posted by Glenn Harper at 11:25 AM