A forgotten book for Friday, plus: Love, death, and ostriches: Mick Herron's The Last Voice You Hear 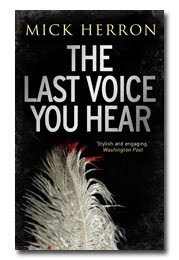 Mick Herron says in an interview that he began his second novel, The Last Voice You Hear (set in Oxford, London, small town and semi-rural England, and transport systems between), with an idea about "a man who insinuates himself into the lives of lonely women, promising them love, but removing all hope of it instead. And the woman investigating this would be someone for whom love had become a forgotten language; one she had to learn again along the way." (see Shotsmag interview here). Sounds like a serial killer novel, and in part it is. But he also says that three ostriches were part of his original idea, and they do indeed, in the last quarter of the novel (their role is partly what you might be expecting when you get to that point, and partly not). There is a second plotline, having to do with solidarity among cops who are inclined to ignore the law: a plot element that is carefully prepared for in early chapters and provides much of the narrative drive in later chapters. In fact, the novel develops slowly, mostly from the point of view of private detective Zoë Boehm (a minor character with a major effect in Herron's first book), mostly in interior monologue. Boehm is following (without a paying client) the aftermath of a previous case (which we see in progress in the flashback first chapter), concerning a teenager's fall from the 14th floor of a housing block. The boy's death gets little attention because the body of a gangster who had evaded prosecution is found on the same day, grabbing all the headlines. Boehm's paying customer is a businessman whose longtime secretary jumped or fell under a subway train: the client wants Boehm to find a boyfriend who entered the secretary's previously loveless life in the months before the event. Some of Boehm's ruminations have to do with love and the lack of it in women's lives, and with the kind of man who might provide relief from that lack for a woman in middle age. Some have to do with the case involving the teenager, his grandfather, and her lingering guilt due to her treatment of the boy during the earlier case, plus the facts of the gangster's life and death. Those thoughts develop slowly alongside Boehm's pursuit of the very slim leads in the secretary's death, until she treads on some toes and the narrative shifts into action and dialogue. The two-part structure has something in common with Herron's earlier Down Cemetery Road, but in the first novel the early sections are comic (at least in part) and the shifts in plot and narrative abrupt (to good effect). In the second novel, the early sections are more melancholy and the shifts, though still dramatic, are less frequent and less abrupt. The result is that the second novel lingers a while in a more literary fictional realm that is very effective but perhaps not to every crime reader's taste (I mentioned Kate Atkinson in connection with Down Cemetery Road, and that comparison, as well as another, to the novels of Sophie Hannah, also apply to The Last Voice You Hear. But when the narrative kicks into high gear, in its thriller sections, the novelist I though of was Stanley Ellin, a master of crime fiction (too little known today--and that brief mention is my "forgotten books Friday contribution) from a couple of decades ago--specifically a siege thriller that I think is called Stronghold. Herron's siege holds up very well in comparison to Ellin's, as well as carrying forward the unconventional serial killer story that Herron is telling. A different and rather more straightforward book than the others by Herron that I've read, The Last Voice You Hear has definitely shoved the followup (featuring at least two of the same characters) to the top of my reading pile.
Posted by Glenn Harper at 8:03 AM

I'll have to check it out. I love this site and checking out recommendations I can't find elsewhere.