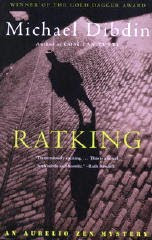 I've never been a big Michael Dibdin fan, without quite being able to put my finger on the reason for my coolness to his writing. I'm generally attracted to crime fiction set in Italy, and am a fan of a diverse range of mysteries set in Italy by writers both Italian and not. I recently went back to Dibdin's first Aurelio Zen novel, Ratking, to try to discover why he has never appealed to me (and I plan to continue on to the last Zen book, published posthumously, End Games). After Ratking (and before reading End Games) at least some of the particular quality of Dibdin's writing is clear. The plot of Ratking is very noir, looking back toward Ross MacDonald among others: Zen, a policeman shunted into administrative tasks after his involvement in the investigation (or non-investigation) into the Moro kidnapping, is reactivated to deal with a very nasty family whose patriarch was kidnapped some months earlier. So far, so good: the Moro case has been the source of much good fiction and film from Italy. Zen is a perfect outsider, being a disgraced detective from Venice dropped into the insular hill town of Perugia. There is much cynicism on Zen's part regarding the family, the police, and Italian politics, and cynicism is always a good thing in noir fiction, and an attitude shared by Camilleri's Commissario Montalbano and Leon's Commissario Brunetti. But already in this first book, Dibdin indicates a key factor of the series: Zen is not anchored in his professional or personal life into a community (in neither a positive nor a negative way). He is always, as in this first case, "parachuted" in to various cities to deal with a situation. His girlfriend in Ratking, not a central character but an interesting one, dumps him at the end. His mother, who is a central character in spite of being mostly off-stage, is barely characterized beyond her motherhood and her isolation in a Roman apartment. And Zen drifts through the case in Perugia, among a cast of unlikeable (though believably so) characters among the family, the police, and the perpetrators of the various crimes that had already occurred before the beginning of the story and those that occur during its progress. When the solution is finally arrived at and a form of justice has been achieved (though in a partial sense that will be familiar to readers of Leon and Camilleri), it's difficult to care too much: neither the unmasked killer nor the victim and his family elicit much emotion from the reader, neither sympathy nor antipathy. Only in the final paragraphs does an event (carefully prepared for in early chapters) give a final twist that provides some satisfaction (and a considerable link to later books int he series). In other words, I found the book rather flat, though well-written, in spite of the considerable appeal of Zen himself. I have some sense that Dibdin's books are a bit of a throwback to an earlier era of crime writing, but I can't quite pin down where that notion comes from. Perhaps after reading End Games I'll have a different opinion (though the very slight, comic penultimate Zen book, Back to Bologna, reviewed here some time ago, didn't change my attitude toward the series). I'm sure there are vehement alternative opinions about Dibdin out there, and I'd love to hear them--I'd even love to be convinced that I'm wrong.
Posted by Glenn Harper at 10:30 AM

I prefer authors from the country itself. You mention Camilleri, whom I like a lot. I also think Gianrico Carofiglio (lawyer, set in Bari) is very good too. I have just finished Inspector Cataldo's Criminal Summer by Luigi Guicciradi, and liked that a lot too. I would always go for an author from the region concerned (if translated) in preference to an author from outside the region, "looking in", if I can. I exclude the UK, where I live, from this. I find it hilarious reading, eg, Elizabeth George or Deborah Crombie, for their ideas of what it is like living in the UK.... a sort of parallel universe!

PS Sorry, I saw you've already reviewed Inspector Cataldo. This is probably why I read it in the first place! I had just forgotten where I read the review when the publisher offered me a copy.

Thanks Maxine--I had always wondered how U.K. readers looked upon writers like Elizabeth George, and I appreciate your assessment.

mmmm! Interesting perspective. Have to say I really enjoy his writing. So far I've read three and I'm enjoying them more.

I like his cynicism but it's generally softened by humour. I especially like how he approaches the differences between the people from the various regions of Italy. The North South divide again! Haven't read any of Camilleri but I will, thanks for the recommendation. I have read some Michele Giutarri which I quite liked but not as much as the Zen books. Takes all sorts!