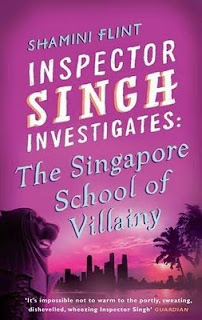 Shamini Flint's new Inspector Singh Investigates: The Singapore School of Villainy is the third in her Southeast Asia series that in previous episodes has visited Malaysia and Bali. Actually it was also the first: I reviewed her first novel, Partners in Crime, some time ago, and she has rewritten that story partly to make it consistent with the now-developed series (and she told me that she wished she'd just written an altogether new story, since it was more effort to rewrite the existing one that it would have been to start over). But the new version is an improvement on the original, which occasionally veered toward a romance rather than a crime novel, with the most central character being not Inspector Singh but one of the lawyers in a firm with a large office in Singapore, Annie Nathan. Now Flint has turned the whole plot over (in some ways that I can't suggest without spoilers), and though much of the material from Annie's point of view remains, the focus is more in the short, portly Sikh detective, who's a more promising focus for what is becoming a long-running crime series. Annie's partners in the law firm are a true nest of vipers, each a criminal (in some sense) in his or her own right. When the senior partner is murdered in his office after hours, it's the partners who are the primary suspects because the office requires key-card access. But one of the cards is missing, and several characters, including both the murdered man's current and ex wives, have good motives. Whereas Partners in Crime relied on an Agatha=Christie-esque confrontation to reach a resolution, the new one calls more upon Singh's instincts (though the original confrontation scene is still there, in altered form, as one of many red herrings. Overall, The Singapore School of Villainy is a good detective story, an enlightening glimpse into the corners of a prosperous but highly controlled city state (and not a tourist-board whitewash), and an investigation of the many forms in which one may besmirch one's own character and reputation. High marks on all counts. Plus we get to see Singh on his home turf, with a great deal more of his wife, his boss, and his fellow cops, fleshing out the portrait of Singapore murder squad and life in the city state. And for anyone who has access to Partners in Crime, it's interesting to see a writer at work, turning a story into quite something different, while retaining much of the interest of the original.
Posted by Glenn Harper at 8:28 AM