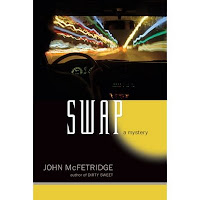 John McFetridge's third crime novel is called Swap in Canada and Let it Ride in the U.S. It's a sequel, of sorts, to the first two (Dirty Sweet and Everybody Knows This is Nowhere)--and perhaps Let it Ride/Swap is not the place to start with McFetridge (though I would definitely recommend reading him, starting from the beginning). McFetridge is telling a story with a big canvas, not with a single main character but with a complex and shifting cast of characters that flows from one book to another. And Swap/Let it Ride provides both a new story and some amplification and background to what happened in the first two books. It's also even more cinematic in the style, with narrative that sticks to the point of view of the person "on camera" at any particular moment, and elliptical, sometimes street-slangy dialogue that's very realistic, once your ear (and eye) gets used to it (some is in quote marks, some not, sometimes there's "he said" and sometimes not): the style moves very fast, shifting among the characters in short sections headed with the names of the characters who're at the center of that section, within the longer chapters.

There's also no introduction to the characters, old or new: but trust me, go with the flow and it will all start to come into focus, moving unpredictably toward an unconventional end, rather like Elmore Leonard (to whom McFetridge is favorably but perhaps too often compared, since his voice is distinctively his own even though he pays homage to the Detroit master in several ways in the new book). The main threads of Let it Ride/Swap are: the continuing saga of the biker gang that has moved west from Montreal and is taking over all the crime action in Canada; Get, a young U.S. Army vet from Detroit, who has come to Canada to meet with J.T., a Canadian Afganistan vet that he contacted while overseas (both using their service to set up networks for importing drugs and guns (J.T. is about to become a "full patch" in the biker gang); Maureen McKeon, a city cop who doesn't really want to go home at night to her house-husband and new, colicky baby; Sunitha, a "rub and tug" sex worker of Indian descent who moonlights as a female "Omar" (if you remember The Wire), stealing from massage parlors and straight businesses, and dreaming of a bigger and more dangerous score); mobsters of the biker and Italian varieties; several characters from the previous books, gangters and not; and a few others. There's no artificial "clockwork" plot bringing all of them together: instead, it's character that drives the story forward, through dialogue, toward several conclusions that only seem inevitable once you've reached them. There's a lot of background to the biker gangs in Canada, explaining much of what was assumed in the earlier books and moving the gang's story forward into a new phase. The violence and the power of the gangs (and the powerlessness of the cops to do much about them) might seem to give a dark, pessimistic tone to the story, but instead, there's a strange positive attitude for at least the survivors of the events: you might not want to meet any of these people (cops or bad guys) in dark (or even bright) alleys, but they're very engaging in McFetridge's telling of the tale. Among Canadian crime writers, McFetridge is the one who's next book I'm most looking forward to, and his on my A-list of international crime as well.
Posted by Glenn Harper at 12:45 PM