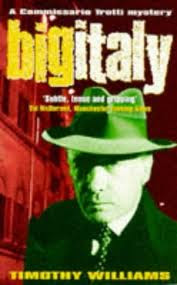 The place of Timothy Williams in the crime fiction world was recently attested to by his inclusion in a lit of the top ten European crime writers in The Guardian (yet he's surely the least well known name in the list). I haven't yet read his series set in Guadaloupe (and so far published only in French, though there's a rumor of publication by Soho Crime), but his Commissario Trotti series is perhaps the best of the distinguished crop of non-Italian crime fiction writers whose work is set in Italy, a literary generation that includes Donna Leon, Magdalen Nabb, and Michael Dibdin.

All of these writers share a jaundiced yet appreciative view of Italy: dismayed by the politics and seduced by the culture. But Williams digs deeper into the real social and historical background, from the "years of lead" and the kidnapping of Moro through a series of scandals in government and church, as well as campaigns against corruption, leading to the "mani pulite" years of the '90s, which is the background of Big Italy, the fifth and last-published of the Trotti novels. In all cases, the big, historical events are filtered through the lens of small, local events and people, accenting the impact of social patterns on the daily life of individuals.

That all sounds dry and stuffy, and the novels are anything but. As with all the books, Big Italy progresses mostly through the often oblique dialogue of the Commissario and his associates and the suspects. The effect is frequently both frustrating and comic, as well as reinforcing the overall sense that what is really going on remains resolutely below the surface of events.

Trotti gets two requests from current and former associates, both of which he refuses. One is from a former colleague, now a private detective who watches too many TV detective shows, who asks for his help in solving a cold murder case, a doctor murdered as he walked from his house one morning. The other request is from his boss, the questore, and from a social worker that Trotti once recruited to assist in the investigation of child molestation; they want the Commissario to reconsider his retirement plans and to take charge of a new "special victims" unit for the protection of children.

Things get more complicated when the private detective is himself murdered and no one wants Trotti to investigate. Two former colleagues (much abused by Trotti when they were working with him) come to his assistance (and are not well rewarded for their cooperation), and local and national politics become implicated in the crimes and in the police as the story moves along (and the book's title, when explained, says a lot about Williams's targets in the series as a whole).

Big Italy has, like the other Trotti novels and most crime fiction set in Italy, a less-than-conclusive ending, without the absolute resolution of much mystery writing. But there's a note of hope in the ending: hope for the future of some of the individual characters and for the goals for which they had been striving, if not confidence in the future of the country as a whole. I hear that there's a sixth Trotti story as yet unpublished. I can wholeheartedly encourage readers who are interested in atypical, ambitious, and atmospheric crime writing to go out and find used copies of the five published Trotti novels, and then to pressure anyone they know in the publishing world to (first) bring them back into print and (second) give us all the chance to read the final episode in the series.
Posted by Glenn Harper at 11:13 AM