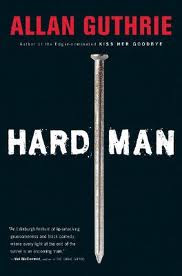 I'm just now getting around to reading Hard Man, a 5-year old book by Allan Guthrie, the master of the noir farce. And, just as in the French comedies, Hard Man is full of motion and action, but rather than being about sex, it's about violence. And there's plenty of it--but the effect is more of comedy than horror (in spite of an extended scene right out of the serial-killer-splatter-movie tradition.

Everyone in the book is damaged, before the story starts, each in his or her own way: damaged by prison, social structure, domestic violence, industrial accidents, or just plain thuggery. We're introduced the the Baxter family, fecklessly trying to get revenge on their sister (and daughter) May's husband Wallace, who kicked her out and threatened her when she announced she was pregnant, and that another man is the father. Pearce (known mostly by his last name) is minding his own business when the Baxters, well and truly thumped by Wallace, intrude and try to persuade him to help them protect May.

What follows is a combination of family solidarity, total idiocy, and the attachment of a solitary man and his dog (who only has three legs). Guthrie is expert at setting up expectations and shattering them, and also at building a narrative's drive and speed. Though you may find none of these characters appealing, and will most likely find what they are all doing reprehensible, once you get into the story, there's no stopping.

Regular readers of Guthrie's books will know what I'm talking about: this book is well up to his usual standards (I haven't read his newest book yet, Slammer, nor the one that came right after Hard Man, Kill Clock). He's the most unrelenting of the "tartan noir" writers, and the funniest, in his uniquely violent style. The writing is clear and crisp, each character with his own personality and style as the narrative moves among them. If you're up for the combination of pain, darkness, and comedy, Guthrie definitely delivers, better than anyone else I can think of.

And that nail on the cover of the U.S. edition offers a certain queasy promise that the text actually surpasses.
Posted by Glenn Harper at 10:21 AM

Glenn-I am going to include this. I hope that's okay.

Somehow "noir" and "Comedy" just don't seem to go together in my mind, too much opposites to work. I understand the concept of black comedy, but the idea that noir fiction, with it's by-definition downward spiral to doom for the characters could be laughable isn't something I can wrap my head around, I'm afraid.

Richard: Thanks for the comment. A lot of comedy is actually very painful (for the characters and the audience), actually. And farce is one of those painful comedy forms--the characters are caught up in something beyond their control and things are moving faster and faster. Not such an alien form for noir to take up. And Guthrie's books are not so much laugh-out-loud funny (though they sometimes are) as comic in their overall effect.
thanks
Glenn

Total idiocy is correct. I like how the Baxter males get clobbered by the gal's husband but think they can physically force an even tougher guy to clobber the husband for them.

I have one of his books (unread), but had not expected to find comedy. Now I'm anxious to read the sucker.