Finally, the sequel to Liza Marklund's The Bomber 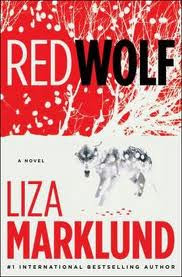 Years ago, I picked up a copy of Liza Marklund's first crime novel, The Bomber in its English translation) as a remainder in a bookshop. Shortly after, a second novel by her, featuring the same investigative journalist (Annika Bengtzon) showed up, also as a remainder (evidently there'd been a big first printing, the publisher expecting a blockbuster that didn't happen--these were the pre-Tattoo, pre-Scandinavian crime wave days). The puzzling thing was that the second book, Studio Sex, was set years before the first one, a prequel in fact.

And only now has the fifth book in the series caught up with the first: Red Wolf takes place in the aftermath of the emotionally, professionally, and psychologically turbulent (for Annika) conclusion to The Bomber. Annika has passed up a chance to advance in the hierarchy of the Stockholm tabloid where she works (Kvällspressen or Evening Post), choosing instead to be an "independent" writer (though still dependent upon her immediate boss and the paper's editor in chief to actually publish her stories). And the atmosphere around her at work is troubled, even beyond the conflictual scenes of The Bomber.

She's trying to get her editors to publish her research into an old terrorist incident in the far north of Sweden when she falls into something more current and more dangerous: a serial killer is stalking the same northern province, and there are echoes of the earlier incident. But the editors forbid her to pursue the case (they think she's still suffering from shell-shock, as indeed she is).

Annika is surely one of the most flawed leading characters in contemporary series-crime-fiction. The only character I've come across recently who's even close is the heroine in the excellent Danish thriller The Boy in the Suitcase, and even she is more together than Annika. Suffering hallucinations, resistance from her bosses, a husband who's having an affair, Annika is barely holding it together. We see her not only in her own interior monologue, but also as her best friend Anne and her husband Thomas see her, emphasizing the egoism, determination, ambition, near collapse, and self dramatization that make up her character.

But she's never dull. And never as callow (even in the earlier books) as the main character in the pulp thriller she wrote with James Patterson (The Postcard Killer, and by the way, I thought that Patterson could have been bothered to offer a more substantial blurb for the back cover of Red Wolf than just "gripping"). Annika's family life is entirely believable: her frustration with Thomas and Thomas's self-justifications and lies surrounding his affair are drawn with credible and lively strokes.

And the extent to which Annika will go to protect herself and her family plays out in the subplot of family betrayal in perhaps an even more interesting way than in the terror-serial-killer plot, demonstrating a ruthlessness and skill in manipulating the social system and the truth. I don't find her relationship with her editor-in-chief entirely credible in Red Wolf (less so than in earlier books) but the sleazy capitalist tool that he shows himself to be here is a logical outcome of his earlier career, as well as an echo of the main plot, which veers into the history of radical groups in Sweden in the '60s and later.

Marklund is clearly at the forefront of Swedish crime writing, perhaps less well known than she should be because she came earlier than that blockbuster trilogy (and her third and fourth books never appeared in the U.S., the first and second long since out of print here--so that a well known and otherwise well informed critic described Red Wolf as the first of her novels to appear in English).

The two movies by Colin Nutley based on her earlier books also were never released in the U.S. (though The Bomber made a pretty good movie), but there's a new series being developed by Yellow Bird, the film company behind not only the Tattoo trilogy but also the Wallander series (the Swedish TV series not taken from Mankell's novels and the U.K. TV series that was), so maybe the films and the books will finally find their English-language audience. Whether U.S. readers are ready for this deeply flawed character and the mayhem she follows or creates (in her career and her family) is another question.
Posted by Glenn Harper at 1:45 PM

Very good review as ever, Glenn, but I have a very different view about Annika. I don't find her flawed, I find her situations extremely realistic. Living through what she has done (not sure if you have read the other books, about her previous boyfriend, meeting Thomas, dealing with work sexism etc, having babies and trying to keep a high pressured job going).....it is a very realistic depiction of what it is actually like being in that situation, unlike most airbrushed fictional portraits. I am not a bit surprised that Annika is as she is, given what she has gone through. (Anne Sapphane her friend is even less together, in the pressured world of TV).

Marklund often gets bored with the plots, one thinks (except possibly in the best book in the series, and most heartfelt, Paradise) but I think Annika is a great depiction of the toll taken by an idealistic person trying to do her best in impossible situations - state of modern journalism, being a good parent, etc. Sometimes I feel that characters in crime fiction with these domestic problems as well as their day jobs just ignore these real issues, particularly if the protag is a male ;-)

Maxine: thanks for the perceptive comments--I don't disagree about the sources of Annika's personal difficulties, but I think it's one of the strengths of the series that Marklund doesn't excuse Annika for her faults. Annika is seen plainly from her own and other points of view, and she is who she is, ambition, self-protection, and all. Too many male detectives with personal problems seem to get a free ride for them, too many easy excuses (the job, etc), and from Annika's example, the stories would be stronger if we the readers could simply see them as they are, from the point of the view (sometimes at least) of the characters who have to put up with them.
thanks again,
Glenn

OT, but there doesn't seem to be any other way to send you a message.

Recommending this site as a test of how truly international your blog's reach is:

Thanks so much for the very thoughtful review.

I'm not sure how many of them are going to be published in the US, but Transworld in the UK have commissioned new translations of the whole of the Annika Bengtzon series (except Prime Time). So far only Red Wolf and Exposed (previously Studio Sex/69) have been published, but the new translation of The Bomber will be out in the UK in November. March 2012 will see the publication of both Last Will (following on from Red Wolf) and Vanished (previously Paradise), and the remaining three books (including the as-yet-untitled ninth book that Liza is currently working on) will all be out in English within a couple of years. It's been a long wait, but at last the whole series will have made it!

But if a male character was obviously ambitious as well as having young family, etc, would he be perceived as "flawed" or would he have some wife or female carer-figure in the background to do all that stuff for him? I don't know - interesting food for thought.

On Neil's comments - I managed to read the first four Annika books in English in their previous translations, Neil's excellent transltion of Red Wolf came after a long wait as Marklund was dropped ( I presume) by her then-publisher. I am glad to hear from Neil that they other books are to be published in translation, but I wish that the rights had been bought so the older books could just have been reissued, and us impatient readers could move on to the new titles that have not yet been translated. Hope it does not take too long to get up to #9.

Thanks for the kind words, Maxine (and sorry to hijack the comments section here). I'm not sure whether there was a rights issue with the earlier translations, but I'm very pleased to have been able to give the whole series (well, almost) the same voice.
As far as I know, the new books should be out at roughly six-monthly intervals following Last Will: I should have finished all of them, including Book 9, by this time next year.