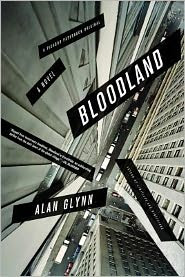 The sequel (sort of) to Alan Glynn's Winterland is set for release by Picador in the U.S. in January (I think it's already out in the U.K.). It's more of a thriller than a straight crime novel, but the thriller aspect is quite different from the usual novel of that genre. There's a lot of tension and plenty of threat, but most of the story takes place in the ordinary streets, apartments, hotels, and boardrooms of today's society.

The link to Winterland is Larry Bolger, now the former prime minister (Taoiseach) of Ireland, and not comfortable being out of the loop of power brokers who had put him into power in the first place. There also some shadowy American plutocrats that played a role in the previous novel and loom even larger here.

The young, unemployed journalist who is the closest thing to a central character in Bloodland summarizes the story at various points as being about a helicopter crash, a UN inspector (dead), an actress (dead), a village massacre, and a presidential candidate. There's also scandal, despair, PTSD, burnout, debts incurred and called in, and several unhappy families. Other than the journalist, Jimmy Gilroy, and Larry Bolger, we get the story from the point of view of a couple of those American plutocrats (one of them the brother of that presidential candidate), some of Bolger's former associates, an Irish developer ruined by the collapse of the Celtic tiger.

Jimmy, who has managed to get an assignment to write the actress's biography, is steered away from the project and toward a bio of Bolger, but in the process he snags onto a thread that links the massacre, the crash, the plutocrats (American and Irish), and some very ruthless people who work for a private security company. Jimmy is a likable innocent caught up in forces way beyond his control, and ends up in New York with everyone on his tail. It takes a while to sort out the cast of characters, but Glynn gradually gives each of them a full portrait through their inner and outer dialogues.

The tone is fast and lively, but not frenetic. It's quite enjoyable to see the plotlines converge, and the characters are fully alive (even the ones moving swiftly toward their deaths). The major difference between Winterland and Bloodland is that, beyond the developers, politicians, power brokers, and moneymen that the two stories share, Winterland also involved gangsters and a woman determined to find the truth about her murdered brother. Jimmy doesn't quite have the personal motivation that she did, at least not until his own life is at stake, and the gangsters anchored Winterland in a gritty urban milieu, in contrast to the boardrooms. Bloodland is anchored instead in a fast-sinking middle class watching jobs and investments and businesses disappear before their eyes (again in contrast to the denizens of the boardrooms).

It's interesting to see Glynn make such a substantial shift between two novels that are in other ways closely related. He's showing the common ground between crime fiction and thrillers, and twisting both genres into his own particular style. The cover of the U.S. edition makes it look like this is a New York story, and it partly is. But at its heart is an Irish story, but anchored in new global economic, political, and social realities. Among the very talented crop of Irish crime writers on the scene today, Glynn has the most global outlook. He's also the author of a semi-scifi thriller made recently into the movie Limitless, but if you're not into quasi-Blade Runner/Phillip K. Dick tales, don't let that association put you off Winterland and Bloodland. They're very vivid stories of today's low and high crimes, and very much tied to a base in contemporary Ireland (while also believably portraying American, Italian, and African milieux).
Posted by Glenn Harper at 5:36 PM

Glynn, posted up my review this morning. The US cover has got me thinking about both covers. In many ways I think neither of them fit as I took Bloodland to be Congo. I guess an African mining scene wouldn't sell in the same way as a Western cityscape. I'm not sure where the cover of the Irish/UK version is of, but it's not Ireland.

Of course, last comment was meant to be Glenn not Glynn!

The funny thing is that my middle name is Alan.