An Engish translation of Jussi Adler-Olsen's Danish crime novel arrived in the U.K. last spring under the title Mercy and is about to arrive in the U.S. with the title The Keeper of Lost Causes. The U.K. title (and cover) suggest a major plot line concerning the kidnapping and imprisonment of a woman who is a politician and the caretaker of a disabled brother. The U.S cover mimics the U.S. covers of the Tattoo trilogy, and otherwise suggests the plot obliquely. Neither, however, does much to suggest the major characteristics of this book and the series which it inaugurates, which deal with a "cold case" squad in Copenhagen called Department Q.

Department Q is started partly as a means of getting a troublesome detective, Carl Mørck, out of the way, and partly to leech some extra cash out of the government (a substantial part of which will not actually to to Department Q, an ongoing element of the story). Mørck has been wounded in an assault that killed another detective and crippled a third, and Mørck might be expected to have some "PTSD" and guilt feelings: but except for a brief moment in an encounter with a therapist (whom the detective visits mostly because she's attractive), Mørck is mostly a straightforward egotist, loudmouth, obnoxious, and effective policeman.

That "straightforward" in the previous sentence indicates a certain lack of enthusiasm on my part. Neither Mørck nor his erstwhile assistant (whose very name, Haffez el-Assad, is a running joke) are really fleshed out. Merete, the kidnapped woman, is a little more substantial, but her story is mostly given in the extreme situation of her imprisonment, so that what we see of her is mostly alternating determination and despair. Her determination, in particular, is very interesting (given the usual use of the kidnapped woman in crime fiction), and we have her life story in some detail, but for me she remained, like the detective, a character more on paper than in the flesh.

The story is moved forward mostly in narration (partly from inside Mørck's head) rather than dialogue. And up to the end, it's mostly Merete's misery and Carl's gradual progress in the investigation (aided very substantially by his mysterious assistant), as well as in his occasional work on the homicide squad's other cases (and the other cops are mostly foils for Mørck (he's the only one who seems capable of actually detecting anything). And the villains, as they are gradually revealed in the second half of the book, seem inadequately motivated, veering from mad science to petty vindictiveness without revealing much else. 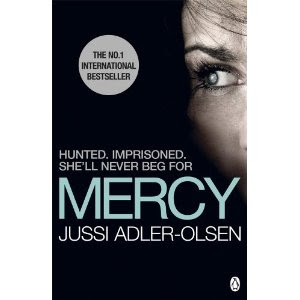 I don't mean to say that this is a bad book. It's just not as three-dimensional as another recent Danish crime novel, The Boy in the Suitcase, or as the best of the Scandinavian crime wave (Theorin, as just one example). I don't know what Mørck's name means in Danish, but the "murk" of the English homonym suggests something of the character: he seems to be mostly lazy, though more capable than his colleagues; even his relationship to his estranged wife seems perfunctory, as if he can't be bothered to be much more than mildly annoyed with her. And Assad, as he's mostly called, is almost cartoon-like, revealing hidden talents at every turn but always falling back into a jokey "immigrant" style of speech and character.

The Keeper of Lost Causes reminded me a bit of another book (which I haven't reviewed yet) that disappointed me, the much shorter Fatale, by Jean-Patrick Manchette. All of Manchette's translated novels are a bit flat in tone, taking a philosophical, noir approach rather than a fleshy, full-bodied approach to crime fiction. But I liked Three to Kill and Prone Gunman, whereas I found Fatale a bit tedious, the characters flat and not rounded. It's a "thesis" book rather than a full story, to me. I have been listening to an audio book of Ian Rankin's The Complaints while reading Fatale on paper and The Keeper of Lost Causes as a pdf (from Netgalley), and though the Complaints may not be Rankin's best book, the characters are certainly fully fleshed out, and the story natural and not forced. Perhaps the other two novels suffered from comparison to the vivid quality of Rankin's prose.

I'm happy to be contradicted, if others got more from the book: Adler-Olsen is well respected in Denmark and has been well reviewed around the world. Perhaps the Department Q series will grow on me. In the meantime, I've started Alan Glynn's Bloodland, which is certainly lively and engaging so far.
Posted by Glenn Harper at 1:12 PM

I think I liked it quite a bit more than you Glenn. My review is here. One of the things that struck me, in retrospect, is the theme of injured-officer-returning-to-work which I think has been done a bit in British crime fiction. I think Danish crime fiction has its own quirks and the story style is just a bit flatter than other Scandinavian, if that makes sense. I do want to read the next in the series

Thanks Kerrie--I think your comment helps clarify my difficulty: you say this one is "flatter" than some other Scandinavian crime fiction. Persson has some of the same flatness, but his books have a "documentary" quality anyway, and don't have a single central character. Maybe that flatness plus trying to read a pdf version of the book prejudiced me against it?

I think many crime fic novels lack this 3-d quality in character, but for me this one worked well. moerk has many as-yet unknown facets but for exampe i thought that the running sub-stories about the exwife's gallery, stepson, partner, etc provided fresh input. I'd be interested to know what yoy make of Dregs by j-l horst in this regard, it has strong elements of Wallander/Linda but for me it worked as a character study in its own right.

I thought Mercy was a lot easier and more enjoyable read than Between Summers longing the only Persson I have read. Mercy kept me reading because the way we gradually found out more and more about each of the characters. I thought it was fairly obvious who were the perpetrators, but because of the two time lines gradually moving together it didn't detract from the tension. I also loved the sub story about the ex wife and stepson, and of course I am sure there is a lot more to discover about Assad.
My review is here http://bit.ly/pBBkV4

You made some interesting remarks Glenn but I found Carl Morck relationship with Assad, one of the strengths of this novel. Some chapters are difficult to believe though, but this does not prevent me from enjoying the book. In any case thanks for your candid review.