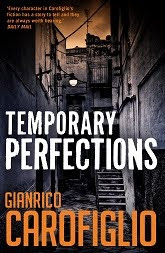 The new Guido Guerrieri novel by Gianrico Carofiglio (translated by Antony Shugaar) is a lot of fun, in spite of the dark-toned plot. I've been mulling over the differences between character-driven and plot-driven crime fiction lately, and Temporary Perfections is decidedly character-driven. Guido is a first-person narrator, and he's clever, introspective, full of interesting digressions, and generally fun to be around. The plot moves slowly forward, frequently interrupted by those digressions, up to a point near the end when suddenly things start to happen, after Guido achieves a particular insight.

The Guerrieri novels are mostly set in Bari on Italy's east coast, but Guido goes to Rome a couple of times in the new book, for a couple of different reasons. So we get a flavor not only for the provincial city but also the capital, both from a legal and a non-legal perspective.

Guido is asked by a friend to help a couple whose college-age daughter has disappeared. The Carabinieri, in charge of the case, have stopped looking and are about to shelve the case, because there aren't any leads and because the daughter is of age and may well have simply decided to disappear.

Guido goes about his usual legal business while also interviewing the detective in charge of the original investigation and several of the daughter's friends, without really breaking any new ground. Along the way, he develops relationships with two women, one close to his own age (the owner of his favorite bar) and the other much younger, one of the daughter's friends. The bar owner's dog will also play an indirect role, but the younger woman begins to take up more and more of Guido's time and interest, along with his deep misgivings about consorting with a woman almost half his age.

Though the mystery is interesting and its solution is complex and moving, the novel stands or falls on Guido's voice, and fortunately he's a delightful character, someone that we'd love to be sitting across a dinner table from. Though there are running characters in the series, it's basically a one-man show. There is a stark difference between Carofiglio's stand-alone novel, The Past is Another Country (made into an interesting film) and the Guerrieri stories, though in fact the stand-alone deals with a lot of the same people and issues as Temporary Perfections. The difference is Guido, who is our window on the dealings of young people veering into crime and vile behavior, while in Another Country, all we have are those same young people. By means of Guido's voice, we have both a clearer view and in the end more sympathy with these people whose behavior eases from self-interest into sociopathy.

There are different publishers and different covers for Temporary Perfections in the U.K. and the U.S. The U.K. cover (the one posted at the top of this review) is both clearer and more specifically atmospheric than the U.S. one (which suggests Rome, an important but after all secondary setting) more than Bari, though I confess some bias toward the U.K. edition's publisher, Bitter Lemon, who brought the Guerrieri series to the world originally.
Posted by Glenn Harper at 4:28 PM