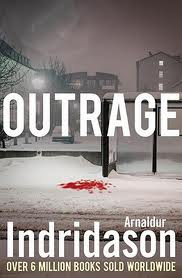 Outrage, Arnaldur Indridason's newly translated Icelandic crime novel, is a departure from the series featuring the dour detective Erlendur, while still being part of the series. Erlendur has gone walkabout, in the fjords where his brother was lost, his body never found, in a storm many years before (the event that has marked the rest of Erlendur's life).

In his absence, Elínborg, Erlendur's female colleague, steps to the foreground of the series (Sigurdur Óli, their other colleague, also features in the book, but in a smaller role than Elínborg). Crime writers have often shifted focus from one running character to another, but rarely has it made such a dramatic difference in the mood of a book: Elínborg is not exactly cheerful, but she lacks Erlendur's gloomy outlook, and her family (all of them alive, not so common among fictional detectives) is constantly in her mind.

The case at hand involves rape and roofies (the date rape drug). In a preface we see a young man on the prowl in a club. But when the police arrive at a crime scene (spoiler alert) in the first chapter, it's a man's body that's found, not a woman's, and he's wearing the T-shirt that the predatory male's potential victim was wearing in the preface. In addition to a difficult case, Elínborg is dealing with (in her own family) a hostile teenage son who's a bad influence on a younger son, an exceptionally intelligent daughter, and a foster son who has abandoned the family that took him in.

Elínborg's passion for cooking (noted in earlier books in the series) is also a strong thread in the story, not only in her own home (where she seldom has time to exercise her talent) but also in the case (where subtle odors play a major role). As in the books featuring Erlendur, the shift away from traditional Icelandic culture to a more homogenized modern one is an important theme, but the shift from Erlendur's point of view to Elínborg's provides a less gloomy and reactionary perspective on the phenomenon.

The subject of rape is investigated in some depth, with special emphasis in the damage that the crime does to the victim's life and mental state. Elínborg claims no special insight because she's a woman, but perhaps the author chose to bring her to the forefront in this case because of her more possibly more sympathetic attitude toward the victims. Yet she does not hesitate to pursue the possibility that the victim of the rape at the center of the story may (when she finally finds her) be the perpetrator of the murder. Other actual and potential victims of rape and murder are offered, giving shades of emphasis about the crime, the victims, and the attacker.

It's always puzzled me that Arnaldur (Icelanders actually go by their first names rather than patronymics, a fact that gives the stories an interestingly informal quality) emphasizes Erlendur to the detriment of his other, quite interesting, police colleagues: perhaps he was thinking the same thing, since Elînborg, when given free rein to dominate the book, is indeed quite interesting, fully the equal of other female detectives in Scandinavian fiction (by male as well as female authors). While I'm curious to know what is happening with Erlendur (there a very few clues, none of them very positive, in Outrage), I'd also be glad to read more about Elínborg in the future (Sigurdur Óli seems not quite so interesting: a more impulsive than intelligent detective).

Outrage follows the pattern of the subgenre of police procedurals, though perhpaps less completely than in Dregs, reviewed here recently. There is a mystery at the heart of Outrage for which some clues are supplied to the reader and the detectives, and we may guess at some aspects of the facts of the case (some of which will be upturned by the development of the tale), but still Elînborg's skill is supplemented by her unique insight perhaps more than is the case with William Wisting of Dregs, whose talent is in organizing the investigation and remaining open to new facts rather than in any special insight. Just goes to show that two excellent books in the same sub-set of crime fiction can demonstrate quite different approaches. I hope that it won't be too long before we get another installment in this series, no matter which detective takes the main role.
Posted by Glenn Harper at 2:41 PM

I'm a big fan of arnaldur and i really respect your taste in books.

I was just wondering what are the books that you would put in your 'essential reading list'???

I would be very grateful if you coud reply.

Nice review, though I think I liked it more than you did! re your comment about Elinborg taking main role - I did read somewhere that he makes Sigurdur Oli (spelling?!) the main character in the next one. But don't quote me on it, I may have misremembered. Personally I find Elinborg much more interesting than him and I can't even remember the other colleagues!