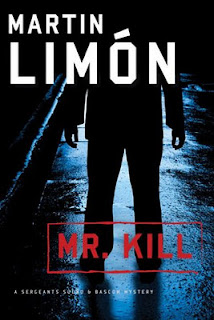 One of the pleasures of reading international crime fiction is the glimpse of other cultures through the stories of crime, criminals, police, etc. martin Limón's series featuring George Sueño and Ernie Bascom, detectives with the 8th Army CID in Korea in the post-Korean-War era, offer insights into two cultures: South Korea and the U.S. Army. Sometimes one predominates in a particular novel, sometimes the other. The new Mr. Kill is a balance between the two.

A Korean woman is raped on a train by what appears to have been an American soldier, and the detectives are called in, without much enthusiasm on the part of the brass because they want to downplay any possible U.S. involvement. At the same time, Bascom & Sueño are ordered to investigate the theft of equipment from an all-female Country & Western band touring Korea for the USO. The detectives shuttle back and forth between the two assignments throughout the book, with the band offering Bascom plenty of opportunity for philandering, one of the primary aspects of his character.

But at the same time, Sueño is particularly horrified by the crime on the train and a subsequent even more brutal assault, in both cases in front of a young mother's children. His sympathy and determination are major drivers of the plot (and of a reader's interest). The addition of a Korean detective, whose name (Gil) sounds like "Kill" to an American ear, giving rise to his nickname and the title of the novel) is also very interesting, since Kill is both effective on his own and a big support for the detectives when the Army hierarchy is resisting their investigation.

All the shuttling back and forth across South Korea (as the band travels the USO circuit and the detectives pursue leads concerning GIs that may have been off base during the crimes) gives perhaps a better overview of Korean society than any of the previous Sueño/Bascom books. I was not totally convinced by some of the plot twists late in the book, when the story shifts to hot pursuit of the rapist, and there's a third subplot that seems to be there mostly to set up the next novel in the series. I would also have liked to see more of Mr. Kill (and it seems he may have a role in the sequel. But overall, it was a brisk and interesting read, and the Army CID elements are a consistently interesting twist on the police procedural/detective story model.
Posted by Glenn Harper at 7:47 AM

Recently I read an excellent South Korean novel, Please Look After Mother by Kyung-Sook Shin. It is not noir but a missing persons story. This book looks like a good follow-up.