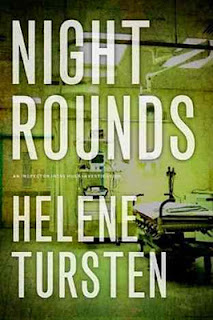 After a protracted gap, SoHo Crime has begun issuing more of the novels in Helene Tursten's Swedish crime series featuring detective Irene Huss of Göteborg. The TV series based on the novels, produced for Swedish television but made available with English subtitles by the independent public television station MhZnetworks in the U.S., has run past the previously published Huss novels, so that in fact I had see the film of Night Rounds before I had access to Laura Wideburg's translation, forthcoming next month from SoHo.

Reading the book after seeing the movie was quite interesting. The TV version accented some aspects of the story (a ghost story, though fairly prominent in the text, is highlighted by its visual presentation in the film). Some of the changes veer toward TV cliche and because of that, I'd recommend the novel over the movie, if you have to choose. There are several more cops in the team in the original book, giving some opportunities for interactions (positive and negative) not possible with the more limited crew in the film (though the characters that do survive the transition are very true to their literary forebears).

Two plot elements central to the story were changed, though. One takes a passing attraction that Irene feels toward one character, a doctor who is also the owner of the hospital where first one nurse and then another is found dead, and turns the attraction into an almost-affair that I found untrue to Irene's character even before reading the book.

The other big change is in a backstory that, in the film, combines the history of that doctor with that of a homeless woman, transforming these threads of the tale into a new character in the film, a mentally challenged caretaker at the hospital. The change lessens the impact of the doctor in the story, leaving him to be mostly a failed administrator and a womanizer rather than a more interesting figure. There's also a denoument in the film that transforms a believable struggle in the doctor's home in the book into a melodramatic scene in the spooky hospital attic in the movie.

Back to the book itself, though: Night Rounds takes advantage of the author's medical background to create an interesting scenario around a private hospital, giving an interesting window onto the Swedish medical system and class structure. The plot closely follows the police procedural format, mostly but not totally focused on Irene, with a sidetrack regarding the detective's family (a chef-husband and two twin, but seemingly not identical, daughters) that's interesting in itself and gives the author the opportunity to show another (not totally honest or legal) side to Irene's character.

The Huss series was one of the earliest of the Swedish crime series to appear in English, thanks to SoHo, and the publisher deserves praise for continuing to translate Huss's novels. Night Rounds shares a supernatural aspect with another Swedish writer, Johan Theorin, but with a lighter and more urban flavor that is less spooky but more contemporary (not a slam on either author, just a different approach).
Posted by Glenn Harper at 12:22 PM

I am so much looking forward to this book as I loved the previous three, but it will be a while yet before we can buy it via UK Amazon (or otherwise in the UK). I've got it bookmarked!

I was also lucky enough to score an advanced copy and enjoyed reading it very much. The author was a nurse, and there was an interesting insiderish feel to the hospital setting.

Good review. I have yet to write mine.