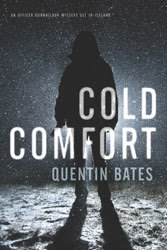 Overall, I think Frozen Assets, the first novel in the series, is a tighter and more coherent story, with an ending that is frustrating but not as anticlimactic. But Cold Comfort introduces some very interesting characters and develops the setting and stories of Gunna's environment in positive ways, leading me to look forward to the next Gunnhildur book with anticipation.
Posted by Glenn Harper at 11:34 AM

webdesign Philippines said...
This comment has been removed by a blog administrator.
11:44 PM