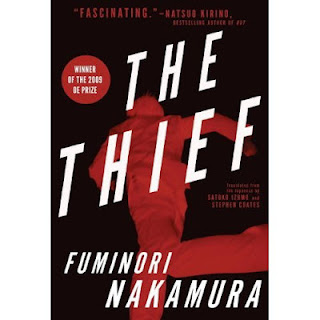 If the story sounds heavy, it's not. Its strangeness is in fact the everyday, matter-of-fact quality of the prose, in contrast to what would seem to be extremely stress-enducing events. The bleak plot line, emotional distance, and plain style are aspects that The Thief has very much in common with the classic noir, along with the cold and imposing urban setting. Some hard-boiled aspects of the book will probably seem strange, even comic, to readers like myself who aren't familiar with Japanese daily life (the narrator keeps buying cans of hot coffee from vending machines, for example). The drily philosophical tone and the noir atmosphere combine perfectly, providing a rapid and enjoyable "read" that is nonetheless cool and distant, provoking the reader to think about (as much as experience) the tale.
Posted by Glenn Harper at 10:48 AM

Marx said...
This comment has been removed by a blog administrator.
12:04 AM

Marx said...
This comment has been removed by a blog administrator.
12:06 AM

Read this and just blogged about this recently myself. It is a little hard to get across why it is so absorbing.