Cameo on The Killing & other video reports 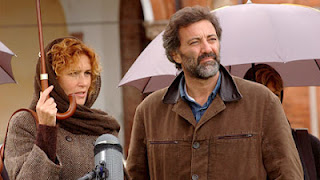 Did anyone notice who showed up in the AMC version o The Killing, in the first episode, as a new character (the District Attorney? Three points for guessing (answer below, and it's nothing to do with the image pasted in here, see below also for the photo identification). I found the 2-hour premiere to the new season of The Killing a bit confusing, though they're trying desperately to recover from that disastrous season-ender for the 1st season. The new characters promise a new story arc that overlaps in part with the original Danish Forbrydelsen, and I'll keep watching at least long enough to see if that develops in an interesting way. They've got to win me over, though.

On other fronts: The Italian series Nebbie e Delitti (Fog and Crimes in the subtitled version running now on MhZ Networks in the U.S.) is an excellent adaptation of the Commissario Soneri series by Valerio Varesi, shifted from the novels' Parma to Ferrara (and that series is the source of the image above). Just when it seemed like they were going down the "damaged detective" road, with Commissario Soneri brooding over his dead wife a la the defective detective, Monk, they found a way out of that trap and moved forward. I thought the first episode was very good, the second at least good (and that's where the "wife" plot was dealt with), and the third one excellent. Looking forward to the 4th and hoping that MhZ will pick up the further seasons.

Speaking of MhZ, I see that a limited selection of their imported mystery series are now available at Netflix (apparently only as DVDs, not streaming video). The more available these series are, the better for all of us. If it sounds like I'm boosting that network, I am--it's the only U.S. network with the courage to run subtitled shows, and I wish them the best.

Other series they've run recently or are running now: A Case of Conscience (also Italian) about a crusading lawyer (good but maybe a step below the quality of Fog and Crimes or Montalbano); Those in Power: an excellent Swedish series about women in politics--not a crime series but the best thing I've seen from Swedish TV so far; Don Matteo (a conventional mystery series and not to my taste, but set in Gubbio); East-West 101 from Australia (a police drama about strains between the Muslim and Euro-australian communities); Anno 1790--a Swedish period crime drama that I didn't like much at first but grew on me very quickly; plus reruns of Beck (more on that series another time), Coliandro (likewise--this cop show set in Bologna is a lot of fun), Wallander, etc.

So, who showed up on The Killing? Sofie Gråbøl, doing very well with the English dialogue, with only a few vowels sounding more Danish than English (and not out of place at all, given the large Scandinavian presence in the Seattle area).
Posted by Glenn Harper at 9:31 AM

We did get the chance to see the US remake over here, if memory serves, but I didn't bother, having seen the Danish version. Apart from the upsetting first episode, it was an amazing portrait of a complete obsessive. The second series was not regarded as so successful (it was half the length, at 10 episodes). Although there were a few glaring plot holes, the acting of Sophie G was brilliant again.

Re the other programmes, we haven't seen many of these yet in the UK, but Netflix has finally launched here so I have hopes. If the Danish series about power is the same as Borgen, I've seen that and agree it is excellent.

We are currently able to see the old Italian series of Inspector Montalbano...finally!!!! 1998 vintage .... it is wonderful in ways advertent and inadvertent.

Thanks, Maxine. The Swedish "Those in Power" series is different from Borgen (though similar enough to be confusing). The Swedish series is from a trilogy of novels (also confusing, in that I think the novels are actually Danish): the first, the Crown Princess, deals with the rise of a young environmentalist who becomes the environment minister in the government, with some unforeseen circumstances both for her and the government; the second part, called Regicide, deals with male arrogance (with regard to politics and sex); the third, which I haven't seen yet, is called the Queen's Sacrifice and deals (apparently) with an elder stateswoman. The series is on par with Borgen in terms of quality, but a bit tougher in some aspects.

East West 101 is fabulous. Complex a slice of Australian life not often seen.

I type too fast. Should read "A complex.." Sigh.