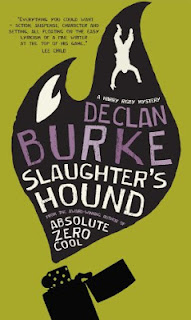 Lately I've been reading books by authors who write novels in pairs or trilogies rather than open-ended series, which seems a relatively recent phenomenon in the crime fiction world. In several cases, the switch from one series or trilogy to another is also a shift in style or genre. For just one example, Carlo Lucarelli's DeLuca series (historical police procedurals) is quite different from his Grazia Negro books (serial killer stories), and different still from his Coliandro stories (which are comic, parodies of the police procedural). All of these series seem to be closed, without further installments (though there is one Grazia Negro book that hasn't been translated, Lupo Mannaro or Werewolf).

Declan Burke has just published Slaughter's Hound, the sequel (and seemingly final installment) to his first book, Eightball Boogie. These two books, featuring not-exactly detective Harry Rigby, are hard-boiled noir, in the tradition of Chandler and Ross MacDonald, but with a contemporary relentlessness and literary references that might remind a reader of a more recent noir writer, Ken Bruen. Burke's other pair of novels, The Big O and Crime Always Pays, are lighter, more in a comic or farcical but still noir tone, closer to Elmore Leonard than Jim Thompson. Neither series resembles Burke's brilliant stand-alone metafiction, Absolute Zero Cool.

Burke's literary references are not intrusive or artificial, but integral to his first-person narrator's character and to the story, and range from Joyce, Beckett, and Yeats to Bukowsky and William Gaddis (who is particularly relevant to one aspect of the overall story, dealing with forgery). One reference is closely related to the dark violence of the story, an image and an act that suggest two grotesque passages in Bataille's Story of the Eye and Kosinski's Painted Bird, though neither writer is mentioned. Neither the literary asides nor the overarching paen to an obscure Irish rock band, Rollerskate Skinny (who I confess I thought Burke had made up until I did a web search) slow down the inexorable downward spiral of Harry's life.

Harry is recently released from incarceration in a mental facility, to which he was confined after killing his brother at the end of Eightball Boogie. A roommate there is the son of a wealthy family right out of Ross MacDonald or even Chinatown, and part of the pleasure of the novel is Rigby's narrative exploration of the intricacies of this spectacularly dysfunctional family. The current Irish financial collapse is also a factor, as it plays out on the bars, alleys, and docks of Sligo, on Ireland's northwest.

Rigby's is an entertaining voice to spend time with, which relieves some of the pain in his story, though in the final section, the pain takes precedence, though there is an almost joyful resignation that echoes the passages repeatedly drawn from Rollerskate Skinny's repertoire. It's a dark journey, but rewarding for an intrepid reader.
Posted by Glenn Harper at 10:43 AM