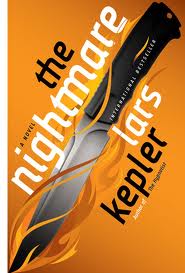 The Nightmare, the sequel to a prominent Swedish crime of recent years, The Hypnotist, by a husband and wife writing team known as Lars Kepler, has the bones of a good book, undermined, especially in the first half, by some obvious flaws. Joona Linna, a Finno-Swedish super-detective, is alternately held in awe by other cops and squeezed out of investigations by the police hierarchy and the security police (in typical crime-fiction fashion). The awe he inspires in other cops is naively presented, and the obstructions placed in his way are a bit cliched. But these problems fade away in the second half, particularly with the development of a new character, Saga Bauer (whose name unfortunately coincides with the wonderful female character in the Danish-Swedish TV series, The Bridge, as well as a recurring description of her as rather elfin--fortunately she's simply a bit under-confident rather than autistic-ish, like the TV Saga).

Joona Linna (who's almost always described by his full name) is not, in his own mind, quite the superman that other people think he is. He's even a bit insecure, at times, despite the intuition that is his strongest investigative tool. The authors give him a flaw (a recurring severe migraine that he under-treats because the medicine fogs his mind), and he has a murky and evidently tragic past that only slowly comes to light for the reader. Joona's amazing investigative abilities are something like those of Jo Nesbø's detective Harry Hole, but Joona is a bit less self-destructive; both characters can be a bit irritating in their super-abilities, but neither is ultimately totally unbelievable, and Joona is if anything a bit less superhuman than Harry. There is, however, one action by Joona in the climax that is hardly believable (but then some of Harry's exploits beggar belief, too).

A number of the other characters, on the other hand, are cliches; the security police and SWAT team are drawn as bloodthirsty cardboard cutouts of their roles, especially early in the book. Some of the victims and a number of characters who are mostly bystanders do have individual personalities, and the settings are vividly drawn.

The writing is direct and effective, though there are stylistic quirks that are a bit distracting, particularly in the time-framing of overlapping episodes, such as a chapter early on that repeats almost exactly the chapter that went before, with a slightly different focus and time. There is also a chase sequence that goes on for a very, very long time. And as the plot gets more and more complicated, there begin to be some rather gothic and graphically cruel elements to the story, not everyone's taste I expect.

The plotting is the real strength of the book, along with the scene-setting. There are, however, some flashbacks that are intended to illuminate some of the character's biography and motivation, but some of these simply impede the story and pad out the page-count and may induce a bit of skimming on the reader's part.