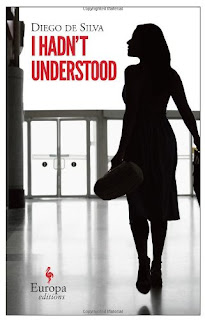 In its bare bones, I Hadn't Understood, by Diego De Silva (published last year in English by Europa Editions in Anthony Shugaar's translation) is about a lawyer in Naples who is approached by the Camorra to represent one of their own, and the web that the criminal organization begins to weave around him.Vincenzo Malconico is an unsuccesful civil lawyer with a divorced wife who still sometimes visits his bed, a son and stepdaughter he sees occasionally, and an office shared with an assortment of similar failures

However,  Malconico's story is really a comic meditation on life today (especially in Italy), on the digressive potential of language, and on the current and future dangers of the criminal influence on daily life. He says at the beginning that he has a problem  controlling his sentences, and that is spectacularly true. Though the story moves inexorably forward, the progress is not in a straight line, in terms of either plot or the voice of Malconico, the narrator of his own tale. If you like a straight-ahead crime novel, maybe this isn't the book for you, but be warned that you will be missing a rich and rewarding experience.

De Silva avoids the cliche's of the usual legal thriller or cime novel: his family life isn't tortured (though his son is involved in a bizarre and dangerous investigation of his own), and the book is about (as much as anything else) his sudden success in both work and love (he unexpectedly finds himself the focus of the most attractive lawyer in the Neapolitan court system, for reasons everyone concerned finds somewhat odd). His sudden success with the Camorra is not unrelated, in terms of the source of his good (perhaps) fortune in that regard. The progress of his involvement with the mob progresses with both danger and comedy, proceeding toward a startling assessment of what the Camorra is and should be, in one of the later chapters.

I Hadn't Understood (Non avevo capito niente, in the original) is quite funny at times, and Vincenzo's voice draws the reader into both the comedy and the larger story. Each of the characters is three-dimensional, each in his or her own particular way. In the end, if Vincenzo doesn't quite achieve the heights he seems to be heading toward, his story ends in a way that is entirely suited to his personality, and also ends with a bit of hope for his future life. I didn't know what to expect from this book--in fact, I ordered a copy because De Silva was the author o one of the best stories presented in an Italian TV series, Crimini, but that story was quite different. But from the first page of this book, Vincenzo's digressive voice had me totally absorbed.