Something to do with Montparnasse 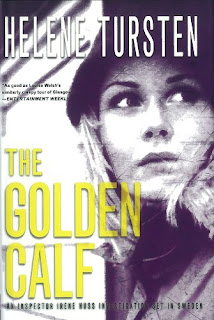 Another twofer today, a bit more tenuous than the last one I posted. Cara Black's newest, Murder Below Montparnasse, and the newest translation from Helene Tursten, The Golden Calf, both have something to do with Montparnasse: Black's novel is set on the edges of the neighborhood, and Tursten's detective, Irene Huss, stays in a hotel on the edge of it when she has to take a junket to Paris in order to solve some murders in Göteborg. Plus both authors use a lot of detail about their detectives in the story (to very different effect).

Tursten first: The Golden Calf is one of the novels that has appeared in the Irene Huss TV series in Sweden (available with English subtitles), but based on memory alone, I'd say that in the case of this novel, the filmmakers have departed more from the book than they did with previous translations to TV drama. For good reason, in terms of the main plot, less so with respect to the detective's private life. For some reason the makers of the TV version (called Gold Digger in English) felt the need to create a mini-crisis in Huss's marriage; in the book, as is usual in the books, Huss and her husband, a succesful chef, get along just fine.

As to the story, we get plenty of atmosphere in both Göteborg and Paris, and lots and lots of detail about the financial and high-tech shenanigans of the circle of friends and business associates within which the murders are taking place (first one and then a pair of the group are murdered, along with the discovery that yet another has been missing for several years). In the book, the motive for the crime (as well as the identity of the killer) remains obscure until almost the end, and then is resolved in a "deus ex machina" fashion that involves the FBI. There's a lot of repetition of detail about the fraudulent financing of the group, and then a lot of detail about the motivations and background for the killers, coming all at once at the end. In the movie, the scheme and the resolution are better organized and more believable. All in all, I didn't think The Golden Calf was one of Tursten's best. 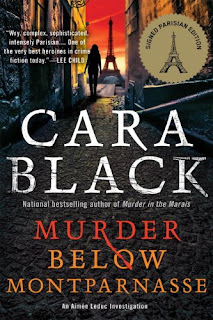 I get a little impatient with Cara Black's Aimée Leduc's books because somehow everything is always about Aimée, her associates, and her troubled family background, rather than about the crime at hand. That's certainly true of Murder Below Montparnasse, but her partner René is off to America at the beginning, for a change of pace and setting, and the detail about Paris is as always interesting. Because the series is set in the recent past and involves high-tech equipment, there's a bit of déjà vu in the revelations about new stuff (such as USB flash drives in this case), which is kind of funny. But the series lives or dies on the reader's relationship with Aimée.

In this case, a mysterious Russian tries to contact her, involves her in a possible murder, and then pulls away from her before letting her know what's going on (but not before implicating her mother in whatever it is). There's a painting (maybe a Modigliani) that would be a major discovery, if it exists, and the Montparnasse milieu of today blends with that of the painter's heyday throughout the story. There is a lot of back-and-forth movement across Paris (and California, while René is there), and considerable repeition (another link with The Golden Calf), but with a satisfactory resolution. I'd say that Murder Below Montparnasse is about on par with Black's usual standard.
Posted by Glenn Harper at 2:00 PM