Philosophical noir from Japan: Fuminori Nakamura's Evil and the Mask 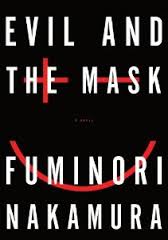 ull disclosure (or perhaps bragging): SoHo Press used a blurb taken from my review of Fuminori Nakamura's previous book (The Thief) on the flyleaf of the new book (Evil and the Mask). Evil and the Mask is, like The Thief, a philsophical crime novel of the sort that both Japanese and French writers do so well. Evil and the Mask begins with an 11-year old boy being told on his birthday by his elderly and wealthy father than he is to be trained as a "cancer," aimed toward destroying those around him and society at large, and that on a subsequent birthday the father will show him hell.

That beginning sets up an expectation somewhere between Mishima and Bataille, but the story follows a somewhat different path, jumping back and forth bttween the child's progress and his adult reincarnation, after surgery to change his appearance; and the story is more like Kobo Abe than Mishima, in the end. That is to say, not as perverse as the latter but as strangely straightforward as the former.

The child, Fumihiro Kuki, is provided with a companion: an adopted girl named Kaori. It becomes obvious that the hell that Fumihiro has been promised will be suffered by Kaori, and Fumihiro has fallen in love with her. Their relationship is at first childlike, and then sexual, and Fumihiro decides to take whatever action is necessary to prevent her from being harmed. His father has already begun to call Kaori to his room, for purposes that are at first unclear, when Fumihiro begins to put his plan into practice.

Subsequent chapters alternate between the boy and the man, and the latter has become estranged from Kaori for unstate reasons while continuing to be fascinated by her. He hires a private detective to find out what her life is like now. As the "contemporary" phase of the story progresses, it involves a cult and an anarchistic gang bent on terrorizing and destroying society, as well as other survivors from the Kuki clan. One of the key elements in the story is the practice of the Kuki patriarchs to sire a son late in life with the purpose of making him a cancer, a theme that repeatedly returns.

The story is very dark, including murder and despair as well as the cancer theme, but Fumihiro's voice (he's the first-person narrator) is simple and direct, without histrionics. The darkness of the story does not follow predictable paths, and the twists and turns lead to a sort of redemption, of a sort that Samuel Beckett might recognize. And for all the philosophy and the perversity of the story, the novel engages the reader without prurience; it's Fumihiro's near-normality as a narrator and actor, and the contrast with the horrors referred to rather than directly portrayed, that keeps the story interesting and lively.

This is certainly not a conventional crime story. It's lurid qualities are subdued (in contrast to, for example the blatantly lurid--comically so at times--of Marek Krajewski's Eberhard Mock stories), and the police detective who becomes interested in Fumihiro in his new identity plays a part in the story that only hints at a conventional crime novel. If you read The Thief, Evil and the Mask will not be a total surprise, since the two protagonists share a path from unconventional childhood through subversive adulthool--though this book is both longer and broader in them and aims than the earlier book. Evil and the Mask is certainly accessible without having first read The Thief, though perhaps a shorter book might offer a reader a useful introduction to the dark but thoughtful world of Fuminori Nakamura.
Posted by Glenn Harper at 10:37 AM

Not a comment on this, but I can't find a way of contacting you... I want to send you a review book! Can you email with your contact details, info@fiveleaves.co.uk. Thanks, Ross Bradshaw

You always pick such interesting!
I have not seen this one and now feel I must do so soon.
Loved your description of it. Thank you for picking this one.
http://mp4mobilevidios.blogspot.com/