Chilled to the Bone, by Quentin Bates 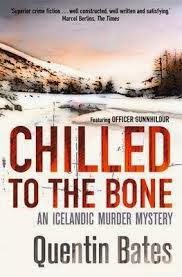 The first two of Quentin Bates's crime novels featuring detective Gunnhildur Gisladottir (Gunna) were perched on the edge of and at the beginning of the financial crash that Iceland endured in recent years. The third, Chilled to the Bone, is in the midst of the suffering caused by the collapse--but not everyone is suffering equally. Gunna, now running a major crimes squad in Reykjavik, is a likable and normal character, with her own private worries and dramas--but she's neither an action heroine nor a damaged noir detective. She comes across to the reader as a real person.

At the beginning of the new book, Gunna arrives at a hotel to find the body of a middle-aged gentleman, tied to the bed naked and dead. From there, the story progresses on parallel tracks following the investigation and the private and professional lives of two new characters, one a very interesting new character, Hekla, a thief of a very particular sort who is supporting her disabled husband and her children in the best way she can in the current climate. Hekla is also a believable character, but with a colorful metier. The other main character is Baddo, recently released from a prison the the Baltics and deported back to his home in Iceland. Through his eyes and his contacts, we see a more conventional crowd of hoodlums and crooks, though Baddo himself remains at the fringes of the city's underworld, violent though he is in his own right.

To me, this is the best Gunnhildur book so far, with lots of ethical and literary ambiguity, a plot that moves rapidly along, and a cast of interesting characters. The streets and in particularly the hotels of Reykjavik are vividly presented in the story, and though Bates is not a native Icelander his familiarity with the island country is evident throughout. His series is not as dark as that of the star of Icelandic Crime, Arnaldur Indri∂ason, but Gunna is an effective anchor for grim but credible and definitely entertaining crime fiction.

I enjoyed this book, too. I really like the way Bates develops the characters so that even the scoundrels have plausible reasons for their actions and enough humanity that you end up sympathizing with them at the oddest times.