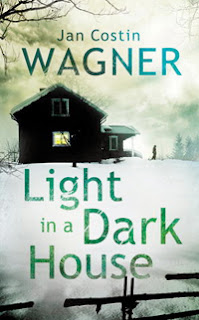 The fourth of Jan Costin Wagner's German-language, Finland-set crime novels featuring detective Kimmo Joentaa was published in Anthea Bell's English translation this year. Wagner is married to a Finnish woman and spends part of the year there, and his familiarity with the country is obvious in the novels. Like its predecessors, Light in a Dark House is meditative rather than propulsive in terms of its pacing. There is a good deal of repetition of the major themes (Joentaa's deceased wife Sanna, a major aspect of the series, but some new ones here as well), in a more poetic than strictly narrative style. For me, the moody pace works, but it could be frustrating for some readers.

The new novel picks up a thread from the previous book, Joentaa's relationship with a prostitute who showed up at his house, refused to give her real name (calling herself Larissa), and disappears periodically. At the beginning of this book, after Joentaa has been assigned the case of a comatose woman's murder in the hospital in Turku, Larissa seemingly goes away for good. Joentaa, however, sends her e-mails letting her know where he has left his house key (and her habit of turning off the house lights when she arrives is the source of the novel's title). At a party at the beginning of the current novel, Larissa seems to recognize Joentaa's boss, calling him "August," which is not his name. The implication is clear, and her disappearance is related to this event.

There are two parallel threads of the story, coexisting with Joentaa's oscillations between three women (the unidentified hospital patient who was murdered, his wife, and Larissa): one is a diary that itself oscillates between an earlier, childhood era (especially concerned with the writer's attraction for a young woman who is for one summer his piano teacher) and the present (in which the writer looks back, with sinister overtones, on the events of that summer and the circumstances of the teacher's disappearance); and a separate investigation in Helsinki, in which two detectives are looking for a killer who threw a businessman off a roof (setting off a series of bold, daylight killings).

The Helsinki detectives and Joentaa from the Turku police are simultaneously led to a small town that is the locus of all the story's threads, and from the point where they all come together, the investigations begin to take off and the novel takes on more of the form of a police procedural (as Joentaa's determination to identify the dead hospital patient takes front stage, ahead of Larissa and Sanna).

The varied settings, disjointed narrative, and moody style work together very well here--perhaps even better than in the earlier novels, especially once the investigations get moving. A film was made of the first Joentaa novel, though the setting was shifted to Germany so that the Finnish setting was lost--and the series is not really "cinematic" in any case. Wagner's series depends on the author's voice and on Joentaa's interior monologue for its distinctive character. But if any further films were made, especially of Light in a Dark House, one might hope for a restoration of the eloquent Finnish landscape.
Posted by Glenn Harper at 9:42 AM