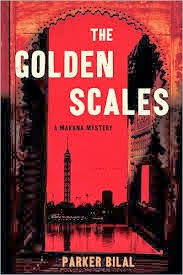 The coincidence is Makana's brief encounter with the same Englishwoman, back in Cairo and still searching for her daughter. Makana begins (as these things go in crime fiction) to see links between the missing footballer and the Englishwoman. To say much more about the plot would involve spoilers, so I'll confine myself to more general comments. The novel is written in a direct style, in the third person, mostly from Makana's point of view. There are some flashbacks to the sad story that caused Makana's flight to Egypt, and the whole pattern of stories provides a rich overlay of conflicting cultures, the topic of the author's other novels as well. But the crime story is not being condescended to. Though the story develops somewhat slowly,  and over a fairly large number of pages (almost 400), the book remains lively and involving throughout. The complexities of Egypt of the late '90s is particularly interesting, given the more recent events. But the story is at base (like many noir novels) one of unhappy families, rich and poor.
Posted by Glenn Harper at 1:39 PM