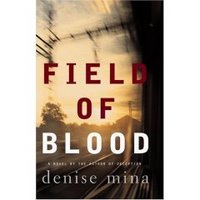 I realize that there was a bit more I intended to say about Silentium, the film made from Wolf Haas's detective novel of the same name. Silentium capitalizes on several aspects of Austrian culture (and specifically that of Salzburg, where the story is set): music festivals, tourist overlooks (a mountain precipice above the city), and the Catholic church. I already dealt with the latter in the previous post, but the use of both other elements (tourism and music festivals) is as important (and as mordantly funny) as the story's sly references to the church.
But on to other things. On the occasion of the release of Denise Mina's second Paddy Meehan novel, I finally got around to reading the first in the series, Field of Blood. One of the unique and interesting aspects of the book is Mina's use of the narrative of "the real Paddy Meehan," a figure whose biography is explained somewhat, along with the author's relationship to him, in an afterword. Paddy the second, the young aspiring journalist, is in many ways the sister of the main character in Mina's first series, the Garnethill trilogy (but without that character's history of abuse--or overt abuse anyway--the abuse of children by well meaning families is a major theme of the new series). Paddy's story is a bit a coming-of-age novel, a bit of Glasgow local color, and a bit the intrepid cub reporter tale. But Mina is very skilled at creating the characters and through them, and the "real Paddy Meehan," she manages to hold together all these elements in a compelling story (a bit more direct and a bit less obliquely Gothic than the Garnethill books).
Posted by Glenn Harper at 11:37 AM

I found Field of Blood very disappointing compared with the Garnethill trilogy and the previous standalone of Mina's. I did read that it is a "Young adult" novel. I thought her earlier novels were in a different class.

I also do not like the Maisie Dobbs series by Jacqueline Winspear, which many people think highly of. I read the first one when it was first published -- packaged as a crime fiction book. I haven't read any more but they are packaged as "Young adult" now, I believe.

Right, just off to read the "His dark materials" trilogy by Philip Pullman!

I have only read one Denise Mina book Sanctum, and it had me screaming at the leading male character to wake up throughout the book.
I guessed the twist in the first half of the book, which may be more a comment on the deviousness of my mind rather than the quality of the story.

I thought the first two Garnetthill books were better than both the third one and the one Norm/Uriah mentions. I think she wrote another standalone before Field of Blood which I enjoyed, but can't now remember anything about it including the title, so I may be imaginging it.
What a dopey comment, sorry -- must go and get some caffeine intake. (And haven't managed to start the Pullmans yet, either.)