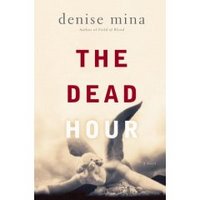 Denise Mina's new novel, The Dead Hour, is the most purely noir novel she's written, and one of the most purely noir novels I've read recently (other than that other Scot, Alan Guthrie, whose 2 novels so far are pure throwbacks to the pulp heyday of noir). Is it something in the air up there? But at the heart of Mina's noir world there beats a doggedly optimistic heart, instead of the depressive, alcoholic, desperate soul at the center of most of noir fiction. Her heroine, cub reporter Paddy Meehan, is struggling to be a subject not an object, as she put it, and her feminism as well as her career struggle are carried on with a determined air that is comic in intention rather than in result--Mina is not making fun of Paddy's optimism (or her weight problem), she's using it to build a 3D character, lust, atheism, family loyalty, professional determination, and poor choices all included. Paddy's positive attitude is at odds with the overall noir atmosphere, at first glance. But it is Paddy's character, in all its ordinariness, that makes this novel work as "pure noir"? And why do I say that about this book and not the previous Paddy Meehan novel, Field of Blood? The separate strains of the new book are each bloodier than the other, and each grounded in working class reality rather than in the family drama of Field of Blood. The Dead Hour reminds me of a Swedish crime novel: not the obvious comparison with that other "intrepid reporter" (that phrase actually occurs in The Dead Hour, in a comic way) in Liza Marklund's novels, but with The Princess of Burundi, because of the milieu of a small town, which is what Mina's Glasgow seems like here, including a mechanic who is involved personally in the crimes. I'll say it again: it is the ordinariness of Paddy and her milieu that make the novel work as noir--Marklund's heroine is practically a superhero by comparison, and the crimes she investigates are big. The implications of Paddy's investigation are big, bigger than the police are willing to investigate, but the actual events, bloody and violent as they are, are the stuff of urban reality rather than thriller fiction. The escalating crimes, the sense of threat experienced by several characters, and the guilty dread of one ordinary person (not Paddy in this case, but an addict) who is forced to kill a thug in a particularly gruesome way, all add to a classic pulp plot, raised oddly to another level by Paddy's personality--because she's not a cliche (though the plot does contain a few of those). And the "real Paddy Meahan," a bigger factor in Field of Blood, plays an important role here nonetheless, in a small cameo with consequences for the story rather than an intertwined sideshow, more the case with the earlier book. I have to say I was surprised by how much I liked The Dead Hour.
Posted by Glenn Harper at 6:02 PM

Hmmm -- well, as I think I mentioned previously, I was (am?) a big fan of Mina's until I read Field of Blood, which I found boring and casually written/plotted. I thought the "real" Paddy Meehan aspects, as well as some others, confused -- not out of author intentionally confusing the reader, but because not enough attention and polishing had been given to the book.

So I decided not to read any more of her Paddy Meehan novels.

But now I've read this. So I'm not sure whether to read it or not. You make it sound pretty good. Is it really a whole heap better than Field of Blood, or just "more of the same but a bit better"?

I suppose one problem for me as a reader of Field of Blood is that I felt I was too old -- I have read that it is a Young Adult book (though not marketed as such), like Jaqueline Winspear (whose first book I didn't like in a similar way), so perhaps I am just too old and out of the "target readership".