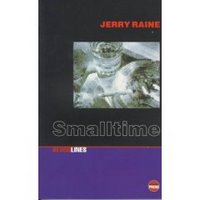 New Swedish noir just keeps coming. There's a newly translated book by Inger Frimansson that I've ordered (it's officially coming out in April in the U.S.) and I just discovered Mari Jungstedt's Unseen, which I've started (but barely). Both come highly recommended. In the meantime, I picked up a copy of Jerry Raine's '90s Smalltime and read (or re-read) it--when I picked it up I couldn't remember whether I'd read it or not, when it was new or newer, and I still can't say for sure. I have a sneaking suspicion that I started it and couldn't finish it. I'd like to hear other people's opinions about Raine, because his next couple of books (Frankie Bosser Comes Home and Slaphead Chameleon) sound like just the kind of noir that I like, but Smalltime is irritating in a lot of ways. The setting is fine--a corner of London suburbia--and the characters are effective, as layabout working class types. But the language is very flat and the plotting is slow without offering any compensation in texture or detail. It's not that the characters or plot are unbelievable, it's just that none of the aspects of the novel seem to add up to much, and the language is so plain-spoken that it has hardly any life. It's not hard-boiled "tough-guy terse" language, it's just so straightforward that you barely sense any author behind it. It is, to be fair, a first novel--and as such it accomplishes its goals in getting the characters through their paces all the way to the end. But it's hard to care about anything in the book, and the occasional comic touches seem added on, not growing integrally out of the situation, just something Raine thought of and added in. Please--any thoughts? Should I go ahead with the next two? And to be honest, I have a smiliar problem with another Do-Not Press author, John B. Spencer. Any thoughts on him?
Posted by Glenn Harper at 2:33 PM

Sorry, can't help on any of this, except to say "with you on the memory thing".
Swedish noir, love it. Look forward to seeing what you make of the Frimansson book. And indeed, Jungstedt.

I read Smalltime quite a while ago, and like yourself, struggled to enjoy it. I mean it was okay, but it didn't exactly set the heather on fire. I picked up a novel by Vicki Hendricks the other day, I don't know if you've come across her yet. (I also haven't read the novel yet myself.) Looks promising though. I've bought a few novels that you've written about, on the strength of your reports, so just thought I'd pass one "possible" author back. Also check out Massimo Carlotto, he's having more work published in English. (Amazingly good author!)

Have to agree with highlander065 - check out Carlotto. There are 5 books in the 'Alligator' series, the 4th and 5th have been translated into English (The Colombian Mule and The Master of Knots). Three stand alones - Death's Dark Abyss, The Fugitive and The Kiss Goodbye, which is the pick of the bunch and an absolute noir classic.