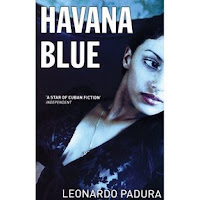 I'm off to Scandinavia soon (in my literary travels--actually I'm off to Barcelona in a month in more literal travel terms), but taking a side trip to Cuba first, by means of Leonardo Padura's Havana Blue (that's the title in English of the third of his quartet-plus-one of novels featuring detective Mario Conde, the Count). All of Padura's books are melancholy, and all contain considerable social criticism of the socialist milieu of this not-very-cop-like cop. But Havana Blue seems even more melancholy (though Mario gets the girl, in a sense) and more critical (if I'm not forgetting some of the critical edge of the books translated earlier). Mario repeatedly refers to the "squalid story" that he wants to write, and the story of Havana Blue is pretty squalid. Corruption is the theme here, in a style that would be as corrupt in a capitalist system, but here has particular Cuban inflections. An old school acquaintance is missing, and Mario's reflections on his school years (and his infatuation with that missing friend's now-wife, Tamara) occupy a considerable portion of the novel, notable for both nostalgia and cutting satire of both the educational system of Communism and the still existing class structure of the school and the state. Padura's novels do not proceed directly, nor does the detective. Though mostly told in the third person, it's Mario's vacillation between attention to the case at hand and meditation on his disastrous personal life (plus his attention to a small circle of old friends) that form the structure and the surface of the story. A reader has to have a lot of tolerance for Mario's ruminations, which don't leave a lot of room for development of other characters who on the basis of the scant evidence seem very interesting, such as "China," the half-Chinese investigator who helps ferret out the financial corruption in this case. But as a window on Cuba, on a particular kind of Anglo-loving Cuban frame of mind (it's largely music and literature from the U.S. and U.K. that Mario returns to again and again, particularly Hemingway). One Americanism in the novel is botched by the translator (who is plainly British)--he gets the lingo of baseball all wrong, and baseball is important enough in this book that the mistakes are irritating. Nevertheless, Havana Blue is an essential addition to the crime fiction available from this setting and this writer.
Posted by Glenn Harper at 11:44 AM

glenn, get me a snail address and i'll mail you a copy of "havana noir," coming next month from akashic, which features, among others, padura.

alex said...
This comment has been removed by a blog administrator.
9:22 PM

I've been trying to read the Havana Quartet and have caught on that they're being published out of order in English. The main female character also appears in Havana Black, which is clearly set after Havana Blue. I think, chronologically, Havana Blue is actually the first of the novels, followed by another that hasn't been published here yet, Havana Red, then Havana Black. There's also a sequel called Adios, Hemingway by another publisher. I've become quite fond of the Count, and hope eventually to read them all.